Skip to main content
Last Days in Babylon: The Exile of Iraq's Jews, the Story of My Family
By: Marina Benjamin
Stock No: WW572046 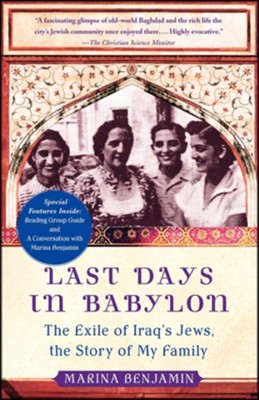 Last Days in Babylon: The Exile of Iraq's Jews, the Story of My Family

▼▲
Marina Benjamin grew up in London feeling estranged from her family's exotic Middle Eastern ways. She refused to speak the Arabic her mother and grandmother spoke at home. She rejected the peculiar food they ate in favor of hamburgers and beer. But when Benjamin had her own child a few years ago, she realized that she was losing her link to the past.

In Last Days in Babylon, Benjamin delves into the story of her family's life among the Jews of Iraq in the first half of the twentieth century. When Iraq gained independence in 1932, Jews were the largest and most prosperous ethnic group in Baghdad. They dominated trade and finance, hobnobbed with Iraqi dignitaries, and lived in grandiose villas on the banks of the Tigris. Just twenty years later the community had been utterly ravaged, its members effectively expelled from the country by a hostile Iraqi government. Benjamin's grandmother Regina Sehayek lived through it all. Born in 1905, when Baghdad was still under Ottoman control, her childhood was a virtual idyll. This privileged existence was barely touched when the British marched into Iraq. But with the rise of Arab nationalism and the first stirrings of anti-Zionism, Regina, then a young mother, began to have dark premonitions of what was to come. By the time Iraq was galvanized by war, revolution, and regicide, Regina was already gone, her hair-raising escape a tragic exodus from a land she loved -- and a permanent departure from the husband whose gentle guiding hand had made her the woman she was.

Benjamin's keen ear and fluid writing bring to life Regina's Baghdad, both good and bad. More than a stirring story of survival, Last Days in Babylon is a bittersweet portrait of Old World Baghdad and its colorful Jewish community, whose roots predate the birth of Islam by a thousand years and whose culture did much to make Iraq the peaceful desert paradise that has since become a distant memory.

In 2004 Benjamin visited Baghdad for the first time, searching for the remains of its once vital Jewish community. What she discovered will haunt anyone who seeks to understand a country that continues to command the world's attention, just as it did when Regina Sehayek proudly walked through Baghdad's streets. By turns moving and funny, Last Days in Babylon is an adventure story, a riveting history, and a timely reminder that behind today's headlines are real people whose lives are caught -- too often tragically -- in the crossfire of misunderstanding, age-old prejudice, and geopolitical ambition.

▼▲
Marina Benjamin has worked as a journalist for fifteen years. She was arts editor of the New Statesman and deputy arts editor at the London Evening Standard, and she has written columns for the Daily Express and for Scotland on Sunday. Her last book, Rocket Dreams, was shortlisted for the Eugene Emme Literature Award. Marina lives in London with her husband and daughter.

▼▲
I'm the author/artist and I want to review Last Days in Babylon: The Exile of Iraq's Jews, the Story of My Family.
Back