Skip to main content
OUR BIGGEST BARGAIN SALE EVER: Over 6,000 deals at never-seen-before prices ~ through 8/23. Shop now >
Baby Blessings: A Prayer for the Day You Are Born
By: Deloris Jordan
Stock No: WW953623 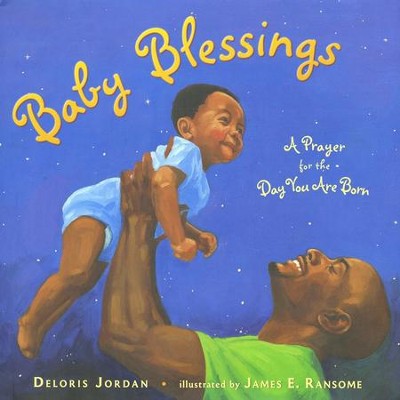 Baby Blessings: A Prayer for the Day You Are Born

▼▲
Celebrate the bond between parent and child in this touching picture book.

This touching story from bestselling author Doloris Jordan celebrates the blessings new parents wish for their babies all through their lives. With a strong emphasis on the bonds families share, the inspirational text is accompanied by exquisite art from renowned illustrator James E. Ransome. From infancy to adulthood, there is always a place for Baby Blessings.

▼▲
Deloris Jordan is Michael Jordan’s mother and the coauthor of Salt in His Shoes and Michael’s Golden Rules, illustrated by Kadir Nelson; Did I Tell You I Love You Today?, illustrated by Shane W. Evans; and Dream Big, illustrated by Barry Root. She is also the author of Family First: Winning the Parenting Game, a book highlighting the seven principles of parenting. Through her work with the James R. Jordan Foundation in Chicago, Illinois, as well as the Jordan Institute for Families at the University of North Carolina at Chapel Hill, Mrs. Jordan is widely regarded as an advocate for children and families. The mother of five children and the grandmother of eleven, Mrs. Jordan lives in Chicago.

James E. Ransome’s highly acclaimed illustrations for Before She Was Harriet received the 2018 Coretta Scott King Illustrator Honor. His other award-winning titles include the Coretta Scott King winner The Creation; Coretta Scott King Honor Book Uncle Jed’s Barbershop; Sweet Clara and the Freedom Quilt; and Let My People Go, winner of the NAACP Image Award. He frequently collaborates with his wife, author Lesa Cline-Ransome. One of their recent titles is Game Changers: The Story of Venus and Serena Williams, which received four starred reviews and was an ALA Notable Children’s Book. James is a professor and coordinator of the MFA Illustration Graduate Program at Syracuse University. He lives in New York’s Hudson River Valley region with his family. Visit James at JamesRansome.com.

▼▲
I'm the author/artist and I want to review Baby Blessings: A Prayer for the Day You Are Born.
Back
Back