We are OPEN and SHIPPING - click here for shipping estimates
PRE-SUMMER CYBER SALE EXTENDED thru 6/1 ~ Over 2,500 items up to 90% off
Babe Ruth and the Baseball Curse
By: David A. Kelly 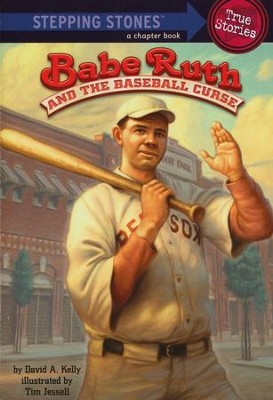 Babe Ruth and the Baseball Curse

▼▲
Stepping Stones Chapter book featuring a true story about Baby Ruth. Starting back when he played for the Red Sox, and then was traded to the Yankees in 1919, at that time one of the worst teams. With Babe Ruth on their roster, the Yankees became a baseball legend, winning championships repeatedly and going to the World Series many times.
Kids ages 6-9 who love baseball will find this an exciting read. 98 pages.

▼▲
Before 1918, the Boston Red Sox were unstoppable. They won World Series after World Series, thanks in part to their charismatic pitcher-slugger Babe Ruth. But some people on the Red Sox felt the Babe was more trouble than he was worth, and he was traded away to one of the worst teams in baseball, the New York Yankees. From then on, the Yankees became a golden team. And the Red Sox? For over 80 years, they just couldn’t win another World Series. Then, in 2004, along came a scruffy, scrappy Red Sox team. Could they break Babe Ruth’s curse and win it all?

▼▲
David A. Kelly is a lifelong baseball—and Red Sox—fan. Babe Ruth and the Baseball Curse is his first book. He lives in West Newton, Massachusetts.

Tim Jessell’s art can be seen in many children’s books, including the popular Secret of Droon series. For the Random House list, he illustrated Two Hot Dogs with Everything and the covers for Crossroads and Raleigh’s Page. He lives in Stillwater, Oklahoma.

▼▲
I'm the author/artist and I want to review Babe Ruth and the Baseball Curse.
Back
×
Back
×