The Azusa Street Mission and Revival - eBook
By: Cecil Robeck 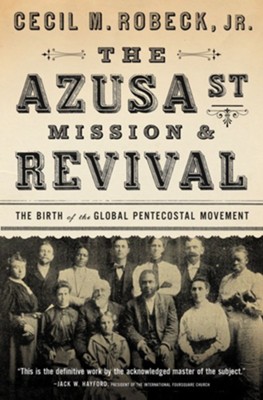 Nearly twenty-five percent of the world's Christians count themselves among the Charismatic and Pentecostal family of Christian Movements, yet few know how Pentecostalism began. The Azusa Street Mission and Revival tells the story of the small racially-inclusive group that gathered in Los Angeles in 1906 and changed the world of Christianity. With little more than a printing press, a trolley stop and a powerful message, the revival that began at Apostolic Faith Mission on Azusa Street, rapidly crossed more than race lines-into Mexico, Western Europe, Scandinavia and West Africa-and began to change the landscape of Christianity. The complete story of the Mission has finally been recorded, with photographs, articles and testimonies.

▼▲
I'm the author/artist and I want to review The Azusa Street Mission and Revival - eBook.
Back
×
Back
×