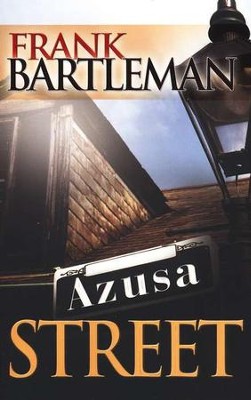 ▼▲
The great Azusa Street revival of the early 1900s began in a humble, run-down mission, with its makeshift "pews" that had been fashioned from planks and empty nail kegs. From this simple setting arose a powerful move of God that swept across the country and around the world. Is it possible to experience the same kind of life-changing revival today? Discover through Frank Bartleman's eyewitness account what brought revival then and what will bring revival now. God is still looking for obedient hearts who long for His presence. Will you be a part of the coming revival?

▼▲
Eyewitness to the Power of the Holy Spirit!

Experience the power and revelation of one of history’s greatest spiritual revivals as if you were there yourself. More than an observer or historian, author Frank Bartleman participated in the Azusa Street Revival and experienced the movement firsthand. His insight into the events leading up to Azusa, the revival itself, and the impact that resulted is perhaps the most detailed account of the falling of the Holy Spirit ever recorded.
Your faith will explode as you read Bartleman’s challenging insights into faith-filled living from his experiences at Azusa Street. You will more fully understand&hellip;

Azusa Street is not a long-forgotten story from thousands of years ago. It was a twentieth-century manifestation of the Holy Spirit, and a movement that continues to endure today!

"He who believes in Me, the works that I do he will do also; and greater works than these he will do, because I go to My Father." —John 14:12

▼▲
Born in a rural Pennsylvania town, Frank Bartleman (1871-1936) grew up on his father’s farm. His first job was to work the plow, though he suffered from relatively poor health all his life. He left home when he was seventeen and was converted in 1893, at the age of twenty-two, in the Grace Baptist Church of Philadelphia. Bartleman’s desire to preach led him to enter full-time ministry the following summer. He was ordained by the Temple Baptist Church. Although he had the opportunity to be put through college and to one day have a paying position as a pastor, he chose instead "a humble walk of poverty and suffering," working in the streets and slums.

In 1897, the young minister left the Baptist ministry. He joined with the Holiness Movement and spent some time with the Salvation Army, the Wesleyan Methodists, and the Peniel Missions. He rarely stayed at one address or in one church for very long. Bartleman’s wandering lifestyle had a tendency to depress him, even to the point where he contemplated suicide in 1899. Yet he was not entirely despondent, for in 1900 he married Anna Ladd, the matron of a school for fallen girls in Pittsburgh, Pennsylvania.

Soon after he was married, Bartleman joined the Wesleyan Methodists and was assigned to a pastorate in Corry, Pennsylvania. Yet this ended up being a bad experience for him, as the church was far from moving toward an emotional and expressive Holiness religion, which was Bartleman’s spiritual focus. Bartleman headed west toward California, with his wife and the first of their four children, Esther, in tow.

In 1904, when the Bartlemans reached California, Frank was appointed as director of the Peniel Mission, a Holiness rescue mission in the heart of Sacramento. From there he tried to reenter the church pastoral ministry, but when this failed, he had to turn to odd jobs in order to keep his family alive. By December, he and his family had headed to Los Angeles, where hardship and tragedy awaited them. In January, Esther died, throwing Bartleman into a spell of grief; this loss, however, ultimately caused him to strengthen his commitment to ministry.

Throughout 1905, Bartleman worked largely with the Holiness churches in Los Angeles but was always on the lookout for the latest work of God. This led him to the Methodist and Baptist churches in the area, especially those connected with the revival occurring in Wales. For a time, Bartleman supported the New Testament Church, pastored by Joseph Smale. He also attended the mission at Azusa Street and established another at Eighth and Maple Streets. Bartleman’s wandering lifestyle as a young man had prepared him for following God’s work throughout his life, for he preached as a traveling evangelist for forty-three years.

Bartleman’s more than 550 articles, 100 tracts, and six books served as a complete and reliable record of the revival at Azusa Street and throughout Los Angeles from 1905 through 1911. Bartleman’s reports were published and republished for Holiness papers around the nation, and his reputation grew as a man who had a passion for increased unity and spiritual renewal among Pentecostals.

Frank Bartleman died on August 23, 1936, and is buried in Burbank, California.

▼▲
I'm the author/artist and I want to review Azusa Street [Frank Bartleman].
Back
Back