Skip to main content
CUSTOMER APPRECIATION SALE: Thousands of starry deals through 6/22!
Why God Won't Go Away: Brain Science and the Biology of Belief - eBook
By: Andrew Newberg, Eugene D'aquili
Stock No: WW12684EB 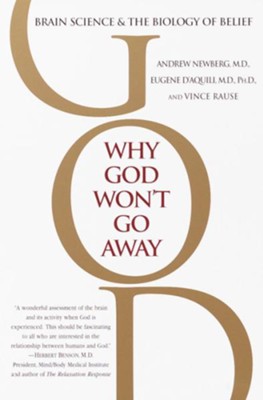 Why God Won't Go Away: Brain Science and the Biology of Belief - eBook

▼▲
Why have we humans always longed to connect with something larger than ourselves? Why does consciousness inevitably involve us in a spiritual quest? Why, in short, won't God go away? Theologians, philosophers, and psychologists have debated this question through the ages, arriving at a range of contradictory and ultimately unprovable answers. But in this brilliant, groundbreaking new book, researchers Andrew Newberg and Eugene d'Aquili offer an explanation that is at once profoundly simple and scientifically precise: the religious impulse is rooted in the biology of the brain.

Newberg and d'Aquili base this revolutionary conclusion on a long-term investigation of brain function and behavior as well as studies they conducted using high-tech imaging techniques to examine the brains of meditating Buddhists and Franciscan nuns at prayer. What they discovered was that intensely focused spiritual contemplation triggers an alteration in the activity of the brain that leads us to perceive transcendent religious experiences as solid and tangibly real. In other words, the sensation that Buddhists call "oneness with the universe" and the Franciscans attribute to the palpable presence of God is not a delusion or a manifestation of wishful thinking but rather a chain of neurological events that can be objectively observed, recorded, and actually photographed.

The inescapable conclusion is that God is hard-wired into the human brain.

In Why God Won't Go Away, Newberg and d'Aquili document their pioneering explorations in the field of neurotheology, an emerging discipline dedicated to understanding the complex relationship between spirituality and the brain. Along the way, they delve into such essential questions as whether humans are biologically compelled to make myths; what is the evolutionary connection between religious ecstasy and sexual orgasm; what do Near Death Experiences reveal about the nature of spiritual phenomena; and how does ritual create its own neurological environment. As their journey unfolds, Newberg and d'Aquili realize that a single, overarching question lies at the heart of their pursuit: Is religion merely a product of biology or has the human brain been mysteriously endowed with the unique capacity to reach and know God?

Blending cutting-edge science with illuminating insights into the nature of consciousness and spirituality, Why God Won't Go Away bridges faith and reason, mysticism and empirical data. The neurological basis of how the brain identifies the "real" is nothing short of miraculous. This fascinating, eye-opening book dares to explore both the miracle and the biology of our enduring relationship with God.

▼▲
Andrew B. Newberg, M.D., is an assistant professor in the Department of Radiology in the Division of Nuclear Medicine and an instructor in the Department of Religious Studies at the University of Pennsylvania. He has spent more than six years studying brain physiology and function, with focus on the neurology of religious and mystical experiences. The co-author, with Dr. Eugene d'Aquili, of The Mystical Mind, Dr. Newberg has presented his work at scientific and religious conferences around the world.

Eugene d'Aquili, M.D., Ph.D., was a clinical assistant professor in the Department of Psychiatry at the University of Pennsylvania for twenty years. His numerous books include Biogenetic Structuralism; Brain, Symbol and Experience; and The Mystical Mind. Dr. d'Aquili died in August 1998, before the completion of this book.

Vince Rause is a freelance writer and journalist whose stories have appeared in the New York Times Magazine, the Philadelphia Inquirer, and many other publications. He is a regular contributor to the Discovery Channel Online.

▼▲
"This is one of the most exciting books I have read in my entire career in Neuropsychiatry and Intuition! Why God Won't Go Away shows how one key area in our brain biologically wires us to be connected to each other, the universe and God. Truly brilliant."
Mona Lisa Schulz, M.D., Ph.D., Author of Awakening Intuition

▼▲
I'm the author/artist and I want to review Why God Won't Go Away: Brain Science and the Biology of Belief - eBook.
Back
Back