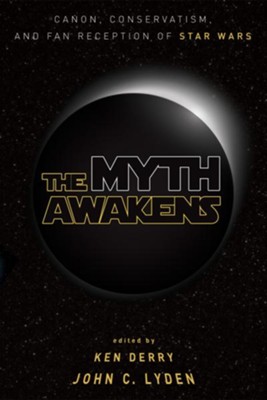 ▼▲
The trailers for Star Wars: The Force Awakens made a strong impression on fans. Many were excited by what they saw as a return to the spirit of George Lucas's 1977 creation. Others--including several white supremacy groups--were upset and offended by key differences, most notably the shift away from a blond, blue-eyed, male protagonist. When the film was finally released, reactions similarly seemed to hinge on whether or not The Force Awakens renewed the ""mythic"" aspects of the original trilogy in ways that fans approved of. The Myth Awakens examines the religious implications of this phenomenon, considering the ways in which myth can function to reinforce ""traditional"" social and political values. In their analyses the authors of this book reflect on fan responses in relation to various elements of (and changes to) the Star Wars canon--including toys, video games, and novels, as well as several of the films. They do so using a variety of critical tools, drawing from studies of gender, race, psychology, politics, authority, music, ritual, and memory. ""Ken Derry's introduction sets the tone for this book. He argues that we ought to take study of popular culture, in this case the Star Wars saga, seriously, because it opens up areas of discussion and interest that are ignored by theology and film. At the same time that we take popular culture seriously, Derry also suggests we take ourselves less seriously. The serious study of religion, myth, and film can actually be fun. You will have fun reading the essays in this book."" --William L. Blizek, University of Nebraska at Omaha, Founding Editor, Journal of Religion & Film ""'Crazy thing is . . . it's true. The Force. The Jedi . . . All of it . . . It's all true."" So says Han Solo in The Force Awakens. This excellent collection helps us to better understand the Star Wars universe, but also gives us insight into the study of religion in our own universe."" --Amir Hussain, Loyola Marymount University, Los Angeles Ken Derry is Associate Professor of Religion, Teaching Stream, at the University of Toronto. His published essays have considered the relationship between religion and violence in a range of written and visual creative works, including John Woo's The Killer, contemporary Indigenous literature, The Wizard of Oz, and the Netflix series Luke Cage. He is very fond of Patton Oswalt's routine about the awfulness of the Star Wars prequels. John C. Lyden is Liberal Arts Core Director and Professor of Liberal Arts at Grand View University. He is the author of Film as Religion (2003) and editor of the Routledge Companion to Religion and Film (2009). He saw the original Star Wars film so many times when it first came out that he memorized most of the dialogue, and can still plausibly impersonate most of the voices.

▼▲
I'm the author/artist and I want to review The Myth Awakens: Canon, Conservatism, and Fan Reception of Star Wars.
Back