Skip to main content
The Great Awakening: The Roots of Evangelical Christianity in Colonial America
By: Thomas S. Kidd
Stock No: WW158465 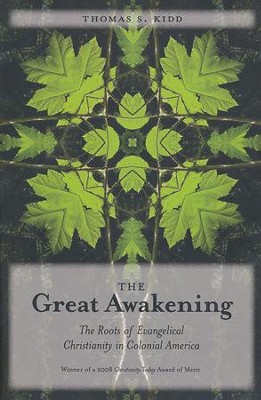 The Great Awakening: The Roots of Evangelical Christianity in Colonial America

▼▲
In the mid-eighteenth century, Americans experienced an outbreak of religious revivals that shook colonial society. This book provides a definitive view of these revivals, now known as the First Great Awakening, and their dramatic effects on American culture. Historian Thomas S. Kidd tells the absorbing story of early American evangelical Christianity through the lives of seminal figures like Jonathan Edwards and George Whitefield as well as many previously unknown preachers, prophets, and penitents.

The Great Awakening helped create the evangelical movement, which heavily emphasized the individual's experience of salvation and the Holy Spirit's work in revivals. By giving many evangelicals radical notions of the spiritual equality of all people, the revivals helped breed the democratic style that would come to characterize the American republic. Kidd carefully separates the positions of moderate supporters of the revivals from those of radical supporters, and he delineates the objections of those who completely deplored the revivals and their wildly egalitarian consequences. The battles among these three camps, the author shows, transformed colonial America and ultimately defined the nature of the evangelical movement.

Thomas S. Kidd is associate professor of history, Baylor University, and author of The Protestant Interest: New England after Puritanism, published by Yale University Press. He lives in Woodway, TX.

▼▲
"Thomas Kidd has gone a long way toward filling the need for a synthetic history of the Great Awakening and the evangelical Christianity it spawned."—Richard W. Pointer, American Historical Review

"This is a fascinating look into America's emphasis on individual salvation and the spiritual equality of humankind, one that is sure to have an audience. . . . Especially recommended for academic libraries, but public libraries would also do well to purchase."—Library Journal

"The origins of evangelicalism . . . [are] luminously demonstrated by Thomas Kidd. He traces with care and sympathy the many forces, including such unexpected influences as German pietism, that shaped evangelicalism from the seventeenth century to the present. Many readers, including evangelicals, will be surprised to discover where 'evangelical Christianity' has been and may be going."—First Things

"This monograph sheds important light on the origins of evangelicalism in the US. . . . Recommended."—Choice

"Kidd demonstrates his wide and masterful reading of countless letters, diaries, sermons, church records, and newspaper articles and offers riveting biographies of important figures. . . . An important and impressive piece of scholarship and is bound to become the first point of reference for a generation of students at all levels who are seeking to make some sense of an intriguing cast of characters and set of events."—Linford D. Fisher, New England Quarterly

"An important and impressive piece of scholarship and is bound to become the first point of reference for a generation of students at all levels who are seeking to make some sense of an intriguing cast of characters and set of events."—Linford D. Fisher, New England Quarterly

"This is a book to end all books on the Great Awakening, substituting a powerful new force in American Christianity: evangelicalism. . . . [A] probing and persuasive book. . . . The author has read everything, both the older classics and the freshest interpretations, and he has brought keen insight and careful integration to the whole. . . . Throughout this fine book, the reader has not been cheated in any way, only richly rewarded."—Edwin S. Gaustad, Catholic Historical Review

". . . a book to end all books on the Great Awakening, substituting a powerful new force in American Christianity: evangelicalism. . . . [A] probing and persuasive book. . . . Throughout this fine book, the reader has not been cheated in any way, only richly rewarded."—Edwin S. Gaustad, Catholic Historical Review


“There is much to praise in this book. Kidd is a first-rate researcher who has read widely in primary sources. He is also a clear, entertaining writer who is able to create memorable portraits of historical characters.”—Catherine A. Brekus, University of Chicago

"Well researched, clearly written and authoritatively argued. There is no book of comparable breadth, either chronologically or geographically."—Mark Noll, University of Notre Dame

“It has been fifty years since Edwin Gaustad told the history of New England’s Great Awakening, and, since then, the revivals themselves have at times been almost lost sight of in debates about the fictions of memory and the invention of tradition. Thomas Kidd’s narrative, returning squarely to the formative events and factions that shaped early evangelicalism, offers a valuable synoptic account of the beginnings of this continuously important movement.”—Leigh E. Schmidt, Princeton University

"An informed and much-needed synthesis of the events that comprise the ’Great Awakening.’ Judiciously describes evangelical efforts from Nova Scotia to Georgia over the entire eighteenth century and demonstrates the centrality of these revivals to an understanding of the American mind. Kidd’s book will become the standard introduction to its subject."—Philip F. Gura, University of North Carolina at Chapel Hill

"With this deeply researched and beautifully focused study of the origins of American evangelicalism, Thomas Kidd gives us nothing less than a fresh, post-revisionist understanding of the Great Awakening. But that is not all. By casting a powerful light upon the controversies at the outset of the evangelical movement, particularly those revolving around the third person of the Trinity, he illuminates the rest of that movement’s conflicted history, providing insight into its enduring complexities, and its likely manifestations in the century ahead."—Wilfred McClay, author of The Masterless: Self and Society in Modern America

▼▲
I'm the author/artist and I want to review The Great Awakening: The Roots of Evangelical Christianity in Colonial America.
Back
Back