Skip to main content
CUSTOMER APPRECIATION SALE: Thousands of starry deals through 6/22!
The Great Awakening: A History of the Revival of Religion in the Time of Whitefield and Edwards
By: Joseph Tracy
Stock No: WW718573 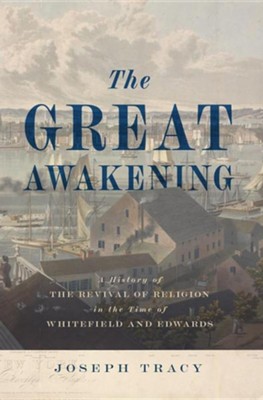 The Great Awakening: A History of the Revival of Religion in the Time of Whitefield and Edwards

Although a considerable number of scattered records accompanied what Jonathan Edwards called the ‘Revival of Religion in New England in 1740’ it was not until 1841 that Joseph Tracy thoroughly sifted these original sources and became its first historian. He aimed to provide ‘a work which should furnish the means of suitably appreciating both the good and the evil of that period of religious history.’ ‘His design,’ as C. H. Maxson has written, ‘was admirably executed.’

Scarcely any phenomenon could be more exacting for a church historian than the Great Awakening, for assessments of its nature and value differed widely at the time of its occurrence and have done ever since: ‘The doctrine of the new birth made its way like lightning into the hearers’ consciences’, wrote George Whitefield, but an adverse contemporary critic asserted that ‘Multitudes were seriously, soberly and solemnly out of their wits.’ Certainly the Great Awakening does not fit into any of the usual norms. It had no procedures – neither ‘altar-calls’ nor enquiry rooms – for making and recording conversions, yet the numbers added to the churches in New England alone have been estimated at between twenty-five and fifty thousand. Emotion was profoundly stirred, yet some of the finest intellects of that age were among its leaders. It moved the common people, yet it led to the establishment of such new colleges of learning as Princeton and Dartmouth, Brown and Rutgers. Again, while the revival supplied neither social nor political messages, the changes it brought about in society were as far reaching as those associated with the 1776 Revolution itself; indeed, Tracy argues that the effects of the Revolution would have been very different if the country had not been ‘strengthened by so many tens of thousands of converts’.

The author follows his theme from the local revivals of the 1730s to the floodtide of 1740-42. While such major figures as Jonathan Edwards and George Whitefield are frequently prominent in the narrative, the material is broad-based and no small part of its fascination lies in the quotations given from the personal narratives and diaries of such men as Eleazar Wheelock, with his ‘close, searching, experimental’ preaching, and William Cooper of Brattle Street Church, Boston, who in one week in 1741 had more persons coming to him ‘in deep concern about their souls’ than in the 24 years of his preceding ministry. Extended treatment is also given to the ebb of the revival down to 1745, with a penetrating discussion of the aberrations and divisions which marked those years. The school of opinion which treated the Great Awakening as a movement of mass hysteria, generated by a few pulpit orators, has been losing ground of late years.

But while a number of modern writers have seen reason to question that thesis, they have not recognised, as Tracy did, that just as the doctrines of the Awakening were biblical so also were the phenomena. That is not to say that Tracy approves all that occurred in the 1740s (any more than the New Testament approves all the phenomena of the apostolic age), and much of the importance of his work lies in the mature and discerning judgment which he brings to his factual material.

This volume remains second to none in its definitive treatment of one of the most important and remarkable eras in the history of the Christian church in modern times.

▼▲
I'm the author/artist and I want to review The Great Awakening: A History of the Revival of Religion in the Time of Whitefield and Edwards.
Back