Skip to main content
SPRING CYBER EVENT STARTS NOW: And it's a really BIG deal! Up to 88% off through 5/24>
The Catholic Awakening: How Catholicism Replaced Protestant Christianity as America's National Church - eBook
By: Joseph Bottum
Stock No: WW11985EB 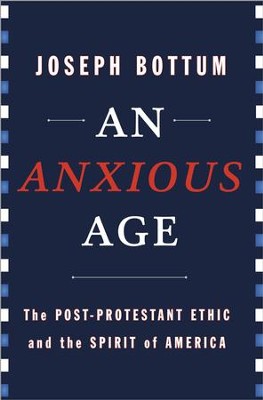 We live in a profoundly spiritual age, but not in any good way. Huge swaths of American culture are driven by manic spiritual anxiety and relentless supernatural worry. Radicals and traditionalists, liberals and conservatives, together with politicians, artists, environmentalists, followers of food fads, and the chattering classes of television commentators: America is filled with people frantically seeking confirmation of their own essential goodness. We are a nation desperate to stand of the side of morality--to know that we are righteous and dwell in the light.
In An Anxious Age, Joseph Bottum offers an account of modern America, presented as a morality tale formed by a collision of spiritual disturbances. And the cause, he claims, is the  most significant and least noticed historical fact of the last fifty years: the collapse of the mainline Protestant churches that were the source of social consensus and cultural unity. Our dangerous spiritual anxieties, broken loose from the churches that once contained them, now madden everything in American life.
Updating The Protestant Ethic and the Sprit of Capitalism, Max Weber's sociological classic, An Anxious Age undertakes two case studies of contemporary social classes adrift in a nation without the religious understandings that gave them meaning. Looking at the college-educated elite he calls "the Poster Children," Bottum sees the post-Protestant heirs of the old mainline Protestant domination of culture: dutiful descendants who claim the high social position of their Christian ancestors even while they reject their ancestors' Christianity. Turning to the Swallows of Capistrano, the Catholics formed by the pontificate of John Paul II, Bottum evaluates the early victories--and later defeats--of the attempt to substitute Catholicism for the dying mainline voice in public life.
Sweeping across American intellectual and cultural history, An Anxious Age traces the course of national religion and warns about the strange angels and even stranger demons with which we now wrestle. Insightful and contrarian, wise and unexpected, An Anxious Age ranks among the great modern accounts of American culture.

▼▲
JOSEPH BOTTUM is one of the nation’s most widely published and influential essayists—and author of The Christmas Plains, classic reflections on the meaning of Christmas and the American prairie. Bottum, whose writing has appeared in The Atlantic, the Wall Street Journal, and the Washington Post, is the former literary editor of The Weekly Standard and editor in chief of First Things. He holds a PhD in medieval philosophy and has done television commentary for programs from NBC's Meet the Press to the PBS Evening News. Bottum Lives with his family in the Black Hills of South Dakota.

Q&A with the Author

▼▲
Q. How did you come up with the idea for An Anxious Age?
In some ways, An Anxious Age really began when I was sent out to report on the protestors at Occupy Wall Street - and couldn't finish the assignment. I could feel a spiritual anxiety about modern civilization radiating from nearly all of them, but I could find no easy way to explain it.

Now, two years later, this book is my answer: Not just those protestors, but nearly everyone today is driven by supernatural concerns, however much or little they realize it. Radicals and traditionalists, liberals and conservatives - together with politicians, artists, environmentalists, followers of food fads, and the chattering classes of television commentators: America is filled with people frantically seeking confirmation of their own essential goodness. We are a nation of individuals desperate to stand on the side of morality - anxious to know that we are righteous and dwell in the light.

The trouble, of course, is that we've lost any shared cultural notion of what exactly that goodness might entail.

Q. The crux of the book is your claim that the most significant and underappreciated fact about all of contemporary America is the collapse of the Mainline Protestant churches over the last fifty years. How did you come to view the decline of Mainline Protestantism as such an influential factor in the shaping of America's cultural landscape?
The reasons for the Mainline churches' decline are interesting in themselves. Science, capitalism, liberal Protestant religion, the bureaucratic needs of rising nation states - all those changes that Max Weber called the "elective affinities" that created the modern world - resulted in a pretty thin metaphysical order. By the late 1800s, most educated Americans probably had no strong belief in any supernatural entities beyond the bare Christian minimum of the individual soul, below, and God, above.

Maybe as a result, a hunger for a thicker world, for a supernatural infusion, is written across America in the nineteenth and early twentieth centuries - from the table-rapping ghosts heard by spiritualists in the 1840s to the popularizing of the Ouija board in the 1910s, and on to our own time. Denied much sustenance in the central rooms of American religion, this spiritual hunger would eventually drain the Mainline churches down to their present cultural weakness.

And here's where it really starts to get interesting. Because American history has led us to expect our national spirituality to be explicitly religious, tied to the nation's churches, we often fail to recognize other effects as spiritual. But strange beings were set free to enter the social and political realms by the decay of the churches that were once a primary source of the cultural unity and social manners that we now lack in the United States.

I've gone back more than a century to Max Weber's classic sociological study The Protestant Ethic and the Spirit of Capitalism to resurrect the notion of "spiritual anxiety" - in an effort to explain what escaped into the public life with the collapse of Mainline Protestantism. What once were religious concerns have fled the churches to become political and social agitations. And across the nation, in liberals and conservatives alike, there lurks a disturbing sense that how we vote is how our souls are saved.

Our dangerous spiritual anxieties, in other words, have broken loose from the churches that used to contain them, and they now madden everything in American life. These new supernatural entities - or, at least, these new social and political manifestations of the enduring human desire to perceive something supernatural in the world - seem to me omnipresent. Think of our willingness to believe that our political opponents are not just wrong but actually evil. Think of the ways we talk about food, weight, and cigarettes, the way we use such concepts as gender, race, and the environment.

In politics, culture, art - in everything, spirits and demons, angels and demigods, flitter through American public life, ferrying back and forth across our social and political interactions the burdens of our spiritual anxieties.

Q. What do you hope to accomplish with the book? What do you hope readers will glean from it?
I hope that An Anxious Age will remind the social groups I called the post-Protestant Poster Children and the Catholic Swallows of Capistrano - will remind, in fact, all Americans - that we are not as far from the traditional forms of American history as we sometimes imagine ourselves. Spiritual concerns still motivate us, and our historical situation is still set by the condition of American Protestantism at any given moment.

More, I would like readers to see that Max Weber's kind of sociological awareness of spiritual causes gives a fuller account of human culture than Karl Marx's hard materialism. Purely material causes (economics, geography, even genetics, as some argue) undoubtedly have strong effects, but the spiritual anxieties of an age, together with the available spiritual rewards, have at least as much influence - and probably more - on the political, moral, and intellectual culture of a society.

▼▲
"A strikingly original diagnosis of the national moral condition. . . . Deftly analytical and also beautifully written, it has the head of Christopher Lasch and the heart of Flannery O’Connor. Anyone wishing to chart the deeper intellectual and religious currents of this American time, let alone anyone who purports to navigate them for the rest of the public, must first read and reckon with An Anxious Age." (National Review, Mary Eberstadt)

"Provocative and profound. . . . With his exquisite, precise descriptions, . . . Joseph Bottum has changed the way we will look at American religion." (Washington Times, Gerald Russello)

"The writing is so marvelous. Bottum’s chapter on John Paul II positively glitters. . . . His side-by-side profile of Bishop Fulton J. Sheen and William F. Buckley Jr. says more about both men in a dozen pages than some books manage to convey. . . . The most interesting, accessible, and perceptive analysis of recent American religious history in years." (The University Bookman, Geoffrey Kabaservice)

"An interpretive guide with great explanatory power. . . . James Burnham, Daniel Bell, Christopher Lasch, . . . with the publication of An Anxious Age, I wonder if these earlier thinkers haven’t all been surpassed. (The Week, Michael Brendan Dougherty)

"Joseph Bottum may be America’s best writer on religion. . . . [An Anxious Age is] a new and invaluable contribution to our understanding of America’s frame of mind, . . . a work of great importance that should be read, re-read and debated by the literate public, believers and non-believers alike." (American Interest, David Goldman)

"An Anxious Age is a remarkable work--bursting at the seams with ideas, insights, analyses and propositions about Protestantism and Catholicism, religion and America, God and man, past and present, the public sphere and our private lives. It is one heck of a book." -William Kristol, Editor, The Weekly Standard

"An Anxious Age is bound to be viewed as a classic of American sociology—not only because of its vast knowledge of historical facts and personalities, its depth and multiple layers of meaning, but also because of its literary elegance and imaginative structure. Bottum offers a wholly new way of understanding religion in public life today. His 'Erie Canal Thesis' about the history of American culture is brilliantly laid out, and the magical trick Bottum works when he asks, Where did the Protestant ethic go? is nearly breathtaking. Who would have guessed that the starchy morals of an older generation would evaporate so quickly—and yet later Christianity-less generations would still exude the same old assumption of moral superiority? Joseph Bottum stands among the nation’s most vivid and penetrating writers." -Michael Novak, Winner of the 1994 Templeton Prize, Author of Writing from Left to Right

▼▲
I'm the author/artist and I want to review The Catholic Awakening: How Catholicism Replaced Protestant Christianity as America's National Church - eBook.
Back
Back