We are OPEN and SHIPPING - click here for shipping estimates
The Awakening Coast: An Anthology of Moravian Writings from Mosquitia and Eastern Nicaragua, 1849-1899
By: Karl Offen, Terry Rugeley 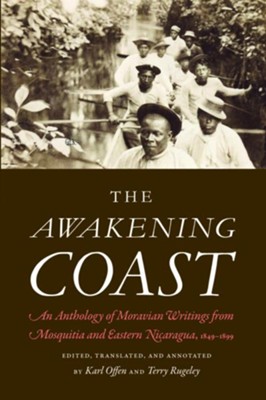 The Awakening Coast: An Anthology of Moravian Writings from Mosquitia and Eastern Nicaragua, 1849-1899

▼▲
The indigenous and Creole inhabitants (Mosquitians of African descent) of the Mosquito Reserve in present-day Nicaragua underwent a key transformation when two Moravian missionaries arrived in 1849. Within a few short generations, the new faith became so firmly established there that eastern Nicaragua to this day remains one of the world’s strongest Moravian enclaves.
The Awakening Coast offers the first comprehensive English-language selection of the writings of the multinational missionaries who established the Moravian faith among the indigenous and Afro-descendant populations through the turbulent years of the Great Awakening of 1881 to 1882, when converts flocked to the church and the mission’s membership more than doubled. The anthology tracks the intersection of religious, political, and economic forces that led to this dynamic religious shift and illustrates how the mission’s first fifty years turned a relatively obscure branch of Protestantism into the most important political and spiritual institution in the region by contextualizing the Great Awakening, Protestant evangelism, and indigenous identity during this time of dramatic social change.

▼▲
“The Awakening Coast is of utmost importance because it shows us—firsthand through the lens of the missionaries—how indigenous peoples as late as the nineteenth century could or could not respond ideologically, economically, politically, and socially to the imposed new trends from the ‘outside,’ including their incorporation in 1894 to Nicaragua. How much deeper can one go into finding appropriate sources?”—Christine Hünefeldt, author of Paying the Price of Freedom: Family and Labor among Lima’s Slaves, 1800–1854

▼▲
I'm the author/artist and I want to review The Awakening Coast: An Anthology of Moravian Writings from Mosquitia and Eastern Nicaragua, 1849-1899.
Back
×