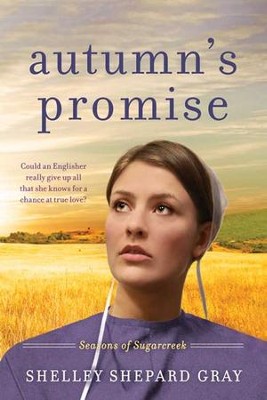 ▼▲
Until Robert Miller met Lilly Allen, his world had been dark. A widower after only two years of marriage, he'd been living in a haze, feeling that, at twenty-four, his life was already over. But thanks to his friendship with Lilly, he now has new reasons to wake up each day. He knows his connection to her doesn't make sense. She's only nineteen, with a past the whole town talks about. Even more, she's not Amish, like Robert. A marriage between the two of them could never happen.

Lilly's heart is drawn to Robert, not to his faith. No matter how much she admires his quiet strength and dependability, she doesn't think she could ever give up her independence and reliance on the modern world. Is their love doomed before it even begins?

An English woman and an Amish man must struggle with how much to sacrifice for their love in Autumn’s Promise, the final book in the Seasons of Sugarcreek series by Shelley Shepard Gray. A poignant and unforgettable novel of love and faith , Autumn’s Promise concludes one remarkable fictional year in the real-life Amish town of Sugarcreek. Shelly Shepard Gray has joined the ranks of bestsellers Beverly Lewis, Wanda Brunstetter, and other masters of Christian romantic fiction who have focused on this colorful, devout, and extraordinary community.

▼▲
I'm the author/artist and I want to review Autumn's Promise: Seasons of Sugarcreek, Book Three - eBook.
Back
×
Back
×