Skip to main content
SPRING CYBER EVENT STARTS NOW: And it's a really BIG deal! Up to 88% off through 5/24>
Autumn Dreams - eBook
By: Gayle Roper
Stock No: WW15235EB 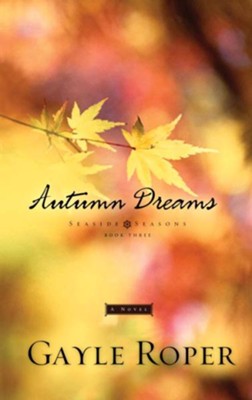 The third book in the Seaside Seasons series, Cass's mother, father, and nephew all need her—but have Cass's dreams gotten lost in the crunch?

The proud proprietor of her own bed-and-breakfast in sleepy Seaside, New Jersey, Cass Merton is intrigued by Dan Harmon, who arrives at SeaSong for an extended stay. After witnessing the collapse of the Twin Towers in New York City, the godly finance specialist is rethinking his life, career, and relationships—or lack of them.

Meanwhile, Cass is questioning her consent to care for her easygoing nephew and feisty teenage niece for a whole year while their parents work in the Middle East. Add in Cass’s four brothers, who don’t take Dad’s compulsive contest entries and Mom’s increasing dementia one bit seriously, and her emotions swirl like the quickly rising hurricane that’s fast approaching Seaside.

But everyday cares aren’t Cass’s only problems. And when a troubled, young employee unknowingly endangers her, and Cass is taken hostage by a gunman, Dan will have to look urgently to the Lord for help.

▼▲
Gayle Roper, a member of American Christian Fiction Writers and Romance Writers of America, is the multiaward-winning, best-selling author of Fatal Deduction and more than forty other books. She teaches and leads mentoring clinics at writers conferences across the country. Gayle lives in eastern Pennsylvania.

▼▲
I'm the author/artist and I want to review Autumn Dreams - eBook.
Back
Back