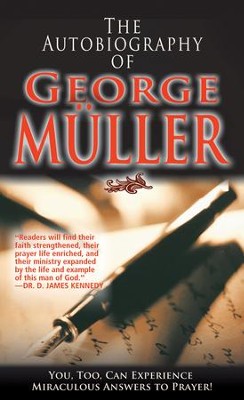 Autobiography of George Muller, The - eBook

▼▲
What can be accomplished in an ordinary man who trusts in an extraordinary God? George Müller discovered the endless possibilities!
These excerpts from his diary allow Müller to tell his own story. Join him on his journey from a life of sin and rebellion to his glorious conversion. Share his struggles and triumphs as he establishes orphan homes to care for thousands of English children, depending on God’s response to his prayer of faith to supply all things. You will learn how to:George Müller’s unwavering, childlike dependence upon his heavenly Father will inspire you to confidently trust the God of the impossible in every area of your life.

▼▲
George Müller (1805–1898) was born in Kroppenstaedt, Prussia, the son of a tax collector. Before he became a Christian, George had the reputation of a liar and a thief. After accepting Christ as his personal Savior, he was used in remarkable ways to provide for over 10,000 orphans during his lifetime. He never went into debt or asked anyone to supply his needs. He trusted in God to provide for him and for the orphans, and God never failed to do so.
In 1875, George began preaching tours that took him over 200,000 miles to forty-two countries to preach to 3 million people. God transformed a little boy who stole from his earthly father into a man who could be trusted with the resources of his heavenly Father.
The ministry of George Müller continues today through the establishment of the George Müller Foundation.

▼▲
I'm the author/artist and I want to review Autobiography of George Muller, The - eBook.
Back
×
Back
×