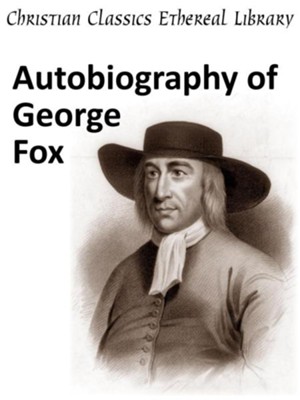 ▼▲
The Autobiography of George Fox is a great Christian autobiography similar to Augustine's Confessions . George Fox, the founder of the Religious Society of Friends, or Quakerism, tells of the key events in his life, focusing on his own religious beliefs and the struggles he faced for them in this lightly edited Autobiography . As a positive mystic, someone who believes that each person can have direct, continual access to the Divine Presence, Fox was often persecuted for his preaching during his travels. Nevertheless, he remained dedicated to his cause of equality and tolerance even after he was imprisoned several times. For this reason, many believers have found Fox's story of perseverance encouraging and uplifting, as well as thoroughly entertaining due to Fox's gift of storytelling. The Autobiography of George Fox is highly recommended. -Tim Perrine, CCEL Staff Writer

▼▲
I'm the author/artist and I want to review Autobiography of George Fox - eBook.
Back
Back