Skip to main content
SPRING CYBER EVENT STARTS NOW: And it's a really BIG deal! Up to 88% off through 5/24>
Autobiography
Edited By: John Robson
By: John Stuart Mill
Stock No: WW33163 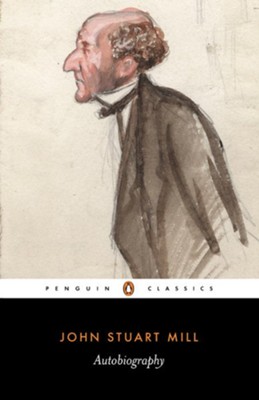 ▼▲
At three years old John Stuart Mill was studying arithmetic and Greek; by the time he was six he was enjoying Hume and Gibbon and writing Roman histories. Diffident, intellectually brilliant, fearless and profound, he became one of the greatest of the Victorian liberals and his works--particularly On Liberty, Utilitarianism, The Subjection of Women and this Autobiographny--are among the crowning achievements of the age.

▼▲
One of the greatest prodigies of his era, John Stuart Mill (1806-73) was studying arithmetic and Greek by the age of three, as part of an astonishingly intense education at his father's hand. Intellectually brilliant, fearless and profound, he became a leading Victorian liberal thinker, whose works - including On Liberty, Utilitarianism, The Subjection of Women and this Autobiography - are among the crowning achievements of the age. Here he describes the pressures placed on him by his childhood, the mental breakdown he suffered as a young man, his struggle to understand a world of feelings and emotions far removed from his father's strict didacticism, and the later development of his own radical beliefs. A moving account of an extraordinary life, this great autobiography reveals a man of deep integrity, constantly searching for truth.

▼▲
John Stuart Mill (1806-73) was educated by his father and through his influence obtained a clerkship at India House. He formed the Utilitarian Society which met to read and discuss essays, and in 1825 he edited Bentham’s Treatise upon Evidence. In 1826 he suffered an acute mental crisis and found that poetry helped him recover the will to live, particularly the work of Wordsworth. Having reconsidered his aims and those of the Benthamite school, he met Harriet Taylor and she inspired a great deal of his philosophy. They married in 1851. Utilitarianism was published in 1861 but before that Mill published his System of Logic (1843), Principles of Political Economy (1848) and On Liberty (1839). His other works include his classic Autobiography (1873). Mill retired in 1858 and became the independent MP for Westminster from 1865 to 1868. He spent the rest of his life in France and died in Avignon.

▼▲
I'm the author/artist and I want to review Autobiography.
Back