Skip to main content
The Autobiography of Dr. Edward Irons: Only by Grace - eBook
By: Edward Irons
Stock No: WW67279EB 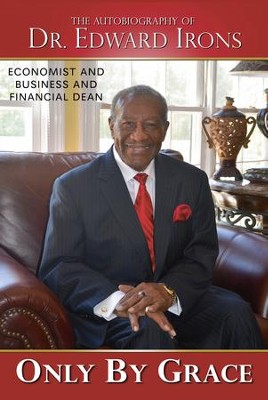 The Autobiography of Dr. Edward Irons: Only by Grace - eBook

▼▲
Only by Grace chronicles the life and achievements of Dr. Edward Irons, whose accomplishments are a testament to the heights one can reach through faith, commitment, and true dedication. Dr. Irons was recruited by Howard University in Washington D.C., to organize a business school. With the help of students and faculty, the business school came to fruition in 1970. He organized the first full program of the National Bankers Association, serving as its First Executive Director, and with the help of the Reverend Jesse Jackson, president of Operation Push, he launched a $100-million Bank Deposit Development Program for minority banks. During that time, Jesse Jackson approached Jim Roche, chairman of General Motors Corporation, and vehemently requested that GMC begin granting automobile franchises to African Americans, which was a historical move. Consequently, automobile franchises became the largest segment of minority business in the U.S. in the years that followed. After receiving his doctorate, he vowed to return to the South and ‘give back,’ rejecting a number of major corporate offers including the Mead Corporation, a multinational paper manufacturer which, at that time, had fifteen subsidiaries around the world. Dr. Irons also declined an offer from Chase Manhattan Bank. Another significant challenge for him was his acceptance of the deanship of the School of Business at Clark Atlanta University. In this position he was charged with the responsibility of securing the accreditation for both the graduate and undergraduate schools, with extremely limited resources. Had he not been successful, the graduate school would have lost its twenty-one-year accreditation. By the grace of God and, perhaps, given the fact that he was a member of the board of the accrediting agency, his quest for accreditation was successful. Following an illustrious twenty-four-year tenure, he retired from the deanship, exhausted. He was then approached by Dr. Thomas Cole, Jr., president of the university, and asked to stay on as Distinguished Professor of Finance/Entrepreneurship, a position which he held for fifteen years prior to his retirement.

▼▲
Dr. Edward Irons spent more than sixty years as a university educator; a business, government and educational executive; a management and financial consultant to business, banks and to the U.S. and foreign governments including the United Nations Economic Commission on Africa. He served on a number of corporate boards and numerous nonprofit organizations. He was appointed to boards and commissions by four Atlanta mayors, three Georgia governors, and one Oklahoma governor. He became the principal organizer and first president of Riverside National Bank, Houston Texas, in 1964. The bank group became the first national charter to be granted to black Americans in the U.S. during the preceding 40-years, and in the process, a renaissance of minority bank ownership in the U.S. was initiated, which was his vision. Dr. Irons grew up in a small, rigidly segregated Oklahoma town—population 6000, of which, less than ten-percent were black. The Grand Cafe on Route 66 featured a neon sign that read: “Nigger Chicken.” Irons recalls, “Those of us who lived on the north side of town had to walk by that restaurant in route to school every day.” Like most proletariat families at that time, his parents never made enough money to fund their four children’s college education. In 1940 (when Dr. Irons was 17-years old), the average black male in the U.S. attended less than six years of school, and the average white attended only nine years. The 1930s and early 1940s included the great depression years. Under those conditions, neither blacks nor whites were attending college in significant numbers. His parents never finished high school; however, he managed to earn a Ph.D. in Finance from Harvard University Graduate School of Business in 1960, before it was common or acceptable for black people to be admitted to Ivy League Schools. In spite of racism, segregation and perpetual adversity, Dr. Irons went on to become a living testimony to the power of hope and steadfastness against improbable odds.

▼▲
I'm the author/artist and I want to review The Autobiography of Dr. Edward Irons: Only by Grace - eBook.
Back
Back