Skip to main content
SPRING CYBER EVENT STARTS NOW: And it's a really BIG deal! Up to 88% off through 5/24>
Great American Lives: The Autobiography of Benjamin Franklin, Personal Memoirs of Ulysses S. Grant, Autobiography of Andrew Carnegie, and The Education of Henry Adams - eBook
By: Benjamin Franklin, Ulysses S. Grant, Andrew Carnegie
Stock No: WW84639EB 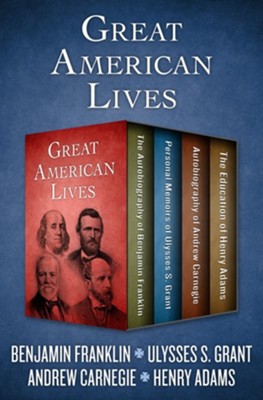 ▼▲
Brilliant, captivating, and unforgettable memoirs from four of the greatest minds in American history.

Penned between 1771 and 1790 and published after his death, TheAutobiography of Benjamin Franklin is one of the most acclaimed and widely read personal histories ever written. From his youth as a printer’s assistant working for his brother’s Boston newspaper through his own publishing, writing, and military careers, his scientific experiments and worldwide travels, his grand triumphs and heartbreaking tragedies, Franklin tells his story with aplomb, bringing to life the flesh-and-blood man behind the American icon.

Completed just days before his death, Ulysses S. Grant’s Personal Memoirs is a clear and compelling account of his military career, focusing on two great conflicts: the Mexican–American War and the Civil War. Lauded for its crisp and direct prose, Grant’s autobiography offers frank insight into everything from the merits of the war with Mexico to the strategies and tactics employed by Union forces against the Confederacy to the poignancy of Grant’s meeting with General Lee at Appomattox Court House.

Documenting a world of tariffs, insider deals, and Wall Street sharks as well as his stunning rise from bobbin boy to steel baron, The Autobiography of Andrew Carnegie opens a window into the great industrialist’s decision-making process. His insights on education, business, and the necessity of giving back for the common good set an inspirational example for aspiring executives and provide a fitting testament to the power of the American dream.

The Education of Henry Adams is the Pulitzer Prize–winning memoir of a brilliant man reckoning with an era of profound change. The great-grandson of President John Adams and the grandson of President John Quincy Adams, Henry Adams possessed one of the most remarkable minds of his generation. Yet he believed himself fundamentally unsuited to the era in which he lived—the tumultuous period between the Civil War and World War I. Written in third person, this uniquely unclassifiable autobiography is the Modern Library’s number-one nonfiction book of the twentieth century.

▼▲
Benjamin Franklin (1706–1790) was a Founding Father of the United States and the first US ambassador to France. Among his myriad accomplishments are the inventions of the lightning rod, bifocals, and the Franklin stove. From 1785 to 1788 he served as the governor of Pennsylvania.

Ulysses S. Grant (1822–1885) was the eighteenth president of the United States and commanded the Union Army to victory in the Civil War. Published posthumously, his autobiography has long been recognized as one of the finest and most revealing personal accounts of the Civil War.

Andrew Carnegie (1835–1919) was a Scottish-American industrialist, railroad man, and steel magnate whose charitable giving and life philosophies ("The man who dies thus rich dies disgraced") made him one of the most captivating figures in American history. After selling his Pittsburgh-based steel company to J. P. Morgan, Carnegie spent the remaining years of his life giving away roughly $350 million (the equivalent of almost $5 trillion today) to universities and charities around the world. A self-proclaimed positivist, his influence and beneficence are reflected in the names of institutions such as Carnegie Hall, Carnegie Mellon University, and the Carnegie Endowment for International Peace.

Henry Adams (1838–1918) was a noted American intellectual, historian, and man of letters. Born in Boston into one of the nation’s most prominent political families, he attended Harvard University, graduating in 1858. From 1861 to 1868 Adams served as private secretary to his father, Charles Francis Adams Sr., whom President Abraham Lincoln had appointed minister to England. Following his return to America, Adams became a journalist in Washington, DC, frequently calling for reform and the ousting of political scoundrels. Ultimately disillusioned with the world of politics, he took a position as professor of medieval history at Harvard. His writings include two novels and numerous biographies and histories, including his nine-volume The History of the United States of America (1801 to 1817). His memoir, The Education of Henry Adams (1907), is widely considered to be among the finest autobiographies ever written in the English language. Adams died at the age of eighty in Washington, DC.

▼▲
I'm the author/artist and I want to review Great American Lives: The Autobiography of Benjamin Franklin, Personal Memoirs of Ulysses S. Grant, Autobiography of Andrew Carnegie, and The Education of Henry Adams - eBook.
Back
Back