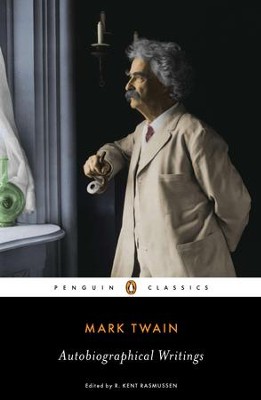 ▼▲
An intimate look at Mark Twain that only he himself could offer, edited by highly respected Twain scholar R. Kent Rasmussen

A must-have for all lovers of Mark Twain, this selection of his autobiographical writings opens a rare window onto the writer’s life, particularly his early years. Born on November 30, 1835, in Florida, Missouri, Samuel Langhorne Clemens first used the pseudonym Mark Twain while a journalist in Nevada in 1863. When his first major book, The Innocents Abroad, appeared six years later, he began what would become one of the most celebrated and influential careers in American letters. Autobiographical Writings will help readers know the author intimately and appreciate why, a century after his death, he remains so vital and appealing.

For more than sixty-five years, Penguin has been the leading publisher of classic literature in the English-speaking world. With more than 1,500 titles, Penguin Classics represents a global bookshelf of the best works throughout history and across genres and disciplines. Readers trust the series to provide authoritative texts enhanced by introductions and notes by distinguished scholars and contemporary authors, as well as up-to-date translations by award-winning translators.

▼▲
Mark Twain (1835–1910) was born Samuel Langhorne Clemens in Florida, Missouri. Starting out as typesetter, he went on to work as a steamboat pilot, prospector, and journalist before publishing his first major book, The Innocents Abroad.

R. Kent Rasmussen is the author or editor of nine books on Mark Twain, including the award-winning Mark Twain A to Z, as well as more than a dozen other books. He lives in Southern California.

▼▲
"To [Clemens's] fascinating recollections Rasmussen contributes an informative Introduction that courageously takes up the issue of Samuel Clemens's veracity, a fuller-than-usual chronology of Clemens's life, an up-to-date bibliography of scholarship devoted to his autobiographical writings, and a surprisingly ample "Glossary" that identifies everyone and everything from Susan Crane to John Hay to the Monday Evening Club to the starboard side of a river vessel&hellip; a highly usable and deeply enjoyable compilation of some of Twain's very best prose."
—Mark Twain Forum

"Rasmussen seems to have been born with the destiny of bringing order and light to Twain scholarship&hellip; So now he’s written yet another book that I would say ought to be near to hand for any scholar doing work on Sam Clemens, the biographical individual."
—Lawrence Berkove, University of Michigan-Dearborn

▼▲
I'm the author/artist and I want to review Autobiographical Writings - eBook.
Back
Back