Skip to main content
SPRING CYBER EVENT STARTS NOW: And it's a really BIG deal! Up to 88% off through 5/24>
Authority Vested: Identity and Change in the Lutheran Church-Missouri Synod
By: Mary Todd
Stock No: WW44572 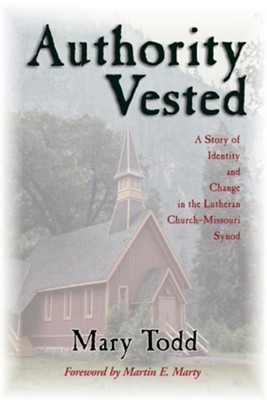 Authority Vested: Identity and Change in the Lutheran Church-Missouri Synod

▼▲
In recounting the history of the denomination, TOdd uses the ministry of women as a case study to show how the Lutheran Church-Missouri Synod has continually redefined its concept of authority in order to maintain its own historic identity. Based on oral histories and solid archival research, Authority Vested not only explores the internal life of a significant denomination but also offers critical insights for other churches seeking to maintain their Christian distinctives in religiously pluralistic America.

▼▲
Like other major Protestant denominations in the United States, the 2.6-million-member Luther Church-Missouri Synod (LCMS), founded in 1847, has struggled with issues of relevance and identity in society at large. In this book Mary Todd chronicles the history of this struggle for identity in the LCMS, critically examining the central--often contentious--issue of authority in relation to Scripture, ministry, and the role of women in the church. In recounting the history of the denomination, Todd uses the ministry of women as a case study to show how the LCMS has continually redefined its concept of authority in order to maintain its own historic identity. Based on oral histories and solid archival research, Authority Vested not only explores the internal life of a significant denomination but also offers critical insights for other churches seeking to maintain their Christian distinctives in religiously pluralistic America.

▼▲
Associate professor of history and director of the Honors Program at Concordia University in River Forest, Illinois.

▼▲
Martin E. Marty, from the Foreword
"One does not have to be a Missouri Synod Lutheran, a Lutheran at all, a Christian or a religious person at all, to become engaged by these pages. They deal with basic human themes. . . I think most will be impressed by [Mary Todd's] fair-mindedness, her calm tone of voice, her patient story-telling, and her invitation to readers to find more angles than before on the sex-and-authority combination that will mark both resistant and bold church bodies and individuals alike."

Calvin Theological Journal
"Well worth reading by anyone interested in churches caught between tradition and modernity."

The Lutheran
"This is not a dry history. The descriptions of specific people, places and occasions reveal the dramatic tensions and energies shaping modern American Lutheranism."

Choice
"Todd has written a history of the Missouri Synod that attempts to capture the unique theological and sociological nuances of this denomination; she focuses on the issue of authority as a key interpretative idea. . . Although a complete history of the LCMS is yet to be written, this study provides the basic framework of the Synod's history, along with an insightful interpretative understanding."

Journal of American History
"Mary Todd recounts the history of the Lutheran Church—Missouri Synod in a direct and compelling style that makes one eager to read the next stage of the story. She makes theological and doctrinal issues clear and defines terms for those of us not familiar with the denomination. . . The personalities in this story and their internal struggles over the identity of the Missouri Lutheran Synod, using the case study of woman's role, make this an interesting study of an American denomination. The methodology, as well as the author's writing skills, is commendable."

American Historical Review
"Todd has produced a superb book, one that suggests a larger story while telling a particular story."

Trinity Seminary Review
"In this well-crafted volume, Mary Todd walks her readers through the basics of LC-MS history, beginning with the religious situation in Germany that precipitated the Saxon emigration of 1838-39. Even students of American Lutheran history who are familiar with the story will learn some new things by reading Todd's account. . . Todd is consistently insightful as she lays out both the Missouri ideal of an unchanging biblical authority that was intended to give the synod its identity, and the reality of the often subtle but nonetheless real changes in the exercise of authority that have actually emerged over the last century and a half. . . This is a 'must read' book not only for those interested in the history and present situation of the Missouri Synod, but of American Lutheranism generally."

Journal of Ecclesiastical History
"An intelligent analysis of the problem of authority — pastoral, theological, scriptural and gender — in a sect preoccupied with authority. . . Mary Todd, a lifelong member of the Lutheran Church-Missouri Synod, has written a dispassionate and useful account."

The Christian Century
"A well-written and well-documented case study of authoritarianism in a church body by a gifted historian."

▼▲
I'm the author/artist and I want to review Authority Vested: Identity and Change in the Lutheran Church-Missouri Synod.
Back