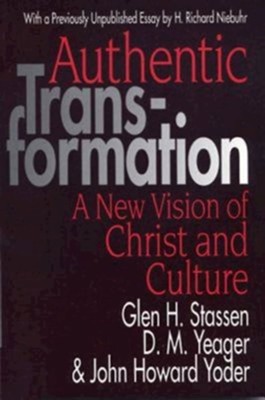 ▼▲
The study of Christian ethics in North America has been profoundly influenced during this century by the work of H. Richard Niebuhr. That influence is felt nowhere as keenly as in the widespread use of his classic text, Christ and Culture. Yet certain central flaws exist in Niebuhr's work on Christ and culture, particularly in its lack of concrete norms for the church's transformative engagement with the world. Scholars have long realized that further work must be done in this area if the church is to speak the word of the gospel adequately in the midst of a pluralistic and changing culture. In this book, Glen H. Stassen, D. M. Yeager, and John Howard Yoder push Christian ethical reflection beyond Niebuhr by offering an analysis and critique of Niebuhr's well-known fivefold typology of the relation of Christ to culture. They wrestle with the issue of how the actual, working church goes about being an agent of the transformation of culture. Unlike Niebuhr, whose description of the transformationist ideal had little grounding in the concrete existence of the church, the authors reflect on those practices through which congregations seek both to embody faithfulness to Jesus Christ and to be the church in their culture. As a prologue to this analytical and constructive task, the volume contains a previously unpublished essay by H. Richard Niebuhr, "Types of Christian Ethics", in which he laid out the framework of the typology he would later expand in Christ and Culture.

▼▲
I'm the author/artist and I want to review Authentic Transformation.
Back