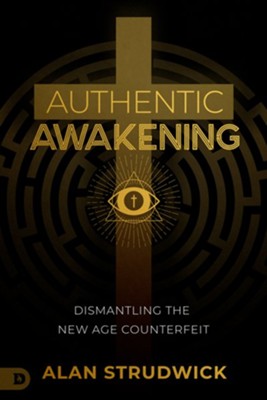 In Authentic Awakening, Alan Strudwick tells the story of his conversion from a high-ranking New Age Leader to a passionate disciple of Jesus. Along the way, Alan exposes Satan’s strategy to infiltrate the church, and equips you with tools to resist the Devil’s schemes.

From the age of 13 Alan Strudwick was chosen by a Hindu Guru to be an initiate and groomed to be a Key Leader in the New Age Movement’s infiltration of Western culture. Trained in the demonic spiritual practices of astral travel/projection, rebirthing, Eastern meditation, palm reading, tarot cards, spiritual guide visitations, hypnosis, levitation, Reiki healing, channeling, and more, he reached the highest echelons of the New Age Movement. But in a miraculous encounter with the Living God, Alan’s life was transformed forever!

In Authentic Awakening, Alan shares his gripping personal journey, alerting you to the subtle and overt schemes the enemy is leveraging in your life.

You will learn how to:

The enemy has a calculated plan to deceive and disciple you. Alan exposes Satan's "New Age" strategies so you can recognize his tactics, resist his snares, and walk in victory!

▼▲
Alan Strudwick is a gifted teacher and prophetic strategist who brings a unique and powerful perspective, not only to the corporate world but also to churches. His life has taken him through many teachings, philosophies, and spiritual paths, including the New Age, alternative religions, and the occult. Alan's subsequent disillusionment with each of these paths eventually led him to a personal relationship with Jesus as His Lord and Savior 28 years ago. Alan is the founder of both Alan Strudwick Ministries and Kingdom Business Ministries, ministry organizations dedicated to equipping and empowering the Body of Christ.

▼▲
I'm the author/artist and I want to review Authentic Awakening: Dismantling the New Age Counterfeit - eBook.
Back
Back