Skip to main content
SPRING CYBER EVENT STARTS NOW: And it's a really BIG deal! Up to 88% off through 5/24>
Jane Austen's England: Daily Life in the Georgian and Regency Periods
By: Roy Adkins, Lesley Adkins
Stock No: WW125722 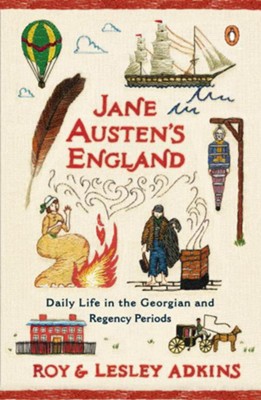 ▼▲
An authoritative account of everyday life in Regency England, the backdrop of Austen’s beloved novels, from the authors of the forthcoming Gibraltar: The Greatest Siege in British History (March 2018)

Nearly two centuries after her death, Jane Austen remains the most cherished of all novelists in the English language, incomparable in the wit, warmth, and insight with which she depicts her characters and life. Yet the milieu Austen presents is only one aspect of the England in which she lived, a time of war, unrest, and dramatic changes in the country’s physical and social landscape. Jane Austen’s England offers a fascinating new view of the great novelist’s time, in a wide-ranging and richly detailed social history of English culture. As in their bestselling book Nelson’s Trafalgar, Roy and Lesley Adkins have drawn upon a wide array of contemporary sources to chart the daily lives of both the gentry and the commoners, providing a vivid cultural snapshot of not only how people worked and played, but how they struggled to survive.

▼▲
Roy and Lesley Adkins are husband-and-wife historians and archaeologists and the bestselling authors of Nelson’s Trafalgar, Jack Tar, and The Keys of Egypt, among other
books. They live in Devon, England.

▼▲
"This is fascinating reading for any classical fiction or history enthusiast. And for Janeites? It’s an essential guide to getting your Austenian life accurate to the last detail."
—The Huffington Post

"As this immensely useful and informative book makes clear, Regency England was no laughing matter."
—Jonathan Yardley, The Washington Post

"Fascinating . . . an excellent read, with each chapter offering a treasury of insights into the lives of Austen’s contemporaries, both rich and poor."
—USA Today

"This encyclopedic and entertaining volume will suite readers who daydream about going back in time to walk alongside literary figures such as Austen. . . . Readers will appreciate its exciting sweep."
—Publishers Weekly

"The Adkins have magnificently covered the social and cultural history of this period with well-structured prose and a sound attention for detail."
—Breck Baumann, The Colonial Review

"Roy and Lesley Adkins vividly evoke the ways in which wealth and poverty coexisted ... This excellent book reminds us that, in many ways, Georgian England was as remote and alien to a modern sensibility as the Roman Empire."
—Nick Rennison, Sunday Times

"Here, we are at the heart of what drives Austen’s characters, what preoccupies their minds and what must have preoccupied the mind of Austen and her sister Cassandra."
—Katie Baker, Daily Beast

"This is a fantastic holiday gift for an Austen fan or history buff."
—Gabrielle Pantera, British Weekly

"For fans of Austen and English history, a deeply informative picture of Regency life."
—Kirkus Reviews

"This enjoyable history enlarges on themes that permeate Austen’s evocations of the social customs of early-nineteenth-century England."
—The New Yorker

"While this beautiful, impeccably-researched volume will rob you of your fancies, it leaves in their place a much more interesting and dynamic picture of Austen’s life and times. Never will you have more appreciation for Jane until you fully understand the world she occupied."
—Shelley DeWees, Austenprose

"A remarkable job of research and writing that informs as well as entertains &hellip; The Adkins do not subject us to mere romantic assumptions, but relate the harsh reality of life for the majority of people living during that age."
—Vic Sanborn, Jane Austen’s World

"A comprehensive survey of daily life in the time of Jane Austen ... It is full of nuggets of surprising information ... This is a fine book for browsing."
—Peter Lewis, Daily Mail (London), Book of the Week

"A lively and impressionistic guide to the age, enjoyable for those entirely new to the subject, but also for the better informed."
—Rosemary Goring, Sunday Herald (Glasgow)

"This is an admirable work for general readers, building on an acquaintance with the novels to recreate the world in which Austen lived. It will keep anyone happy for several days ... and will bear being taken up and read again and again."
—Professor Nicholas Orme, Church Times (London)

"It’s a dense and scholarly work but full of fascinating and intimate details, especially about the quality of life."
—Susan Kurosawa, The Australian (Sydney)

"A rich, fascinating, accessible and entertaining history of the ordinary people of Georgian England ... Georgian England comes to life, sounds and smells, warts and all."
—Anna Creer, Sydney Morning Herald

"An inviting history that takes readers out of Austen’s drawing rooms and into the England of her all-too-short life ... Against this backdrop, Austen’s strong female characters become even more of a delight."
—Maureen McCarthy, Star Tribune

"An incisive flavor of Regency England in every hue emerges."
—Good Book Guide

"A brilliant chronicle of the period ... Start to finish, this is an authoritative and entertaining sketch of life in England during Jane Austen’s time ... to be savored again and again."
—George Jepson, Quarterdeck

"A fascinating read, incredibly well researched ... what stands out for me is the style in which it is written: when I had finished reading it, I kept dipping back into it!"
—Sam Simmons, Folklife Quarterly

"This book will fascinate. As a result, you will be more attuned to how slight a sliver of Regency England you are watching next time you tune into a BBC adaptation of one of Austen’s novels."
—Michael D. Langan, Buffalo News

"Through scrupulous, in-depth research, the authors give a very complete picture of the little people of the time ... [a] very readable, close look at England during the Regency period."
—Rosi Hollinbeck, San Francisco Book Review

"Masterfully and deviously written ... almost impossible to stop reading. One topic just flows into another and it’s all fascinating and ... begs to be re-read."
—Jennifer Petkus, My Particular Friend blog

"Roy and Lesley Adkins vividly portray fascinating aspects of the daily lives of ordinary people in Georgian England. The book is eminently readable from cover to cover, or can be dipped into from time to time."
—Julian Stockwin blog

"Impeccably researched and eminently readable ... a book to read from cover to cover – or to be browsed at random."
—Linda Collison, Historic Naval Fiction

"Some of the most readable nonfiction that I have encountered. Lacking that textbook feel so common in nonfiction, this book draws the reader in, educating and entertaining at the same time ... Many Jane Austen fans will enjoy this book for its ability to place the reader inside her world."
—Carpe Librum Blog

▼▲
I'm the author/artist and I want to review Jane Austen's England: Daily Life in the Georgian and Regency Periods.
Back