Skip to main content
SPRING CYBER EVENT STARTS NOW: And it's a really BIG deal! Up to 88% off through 5/24>
Jane Austen Unabridged CD Collection: Pride and Prejudice, Persuasion, and Emma
By: Jane Austen
Stock No: WW386568 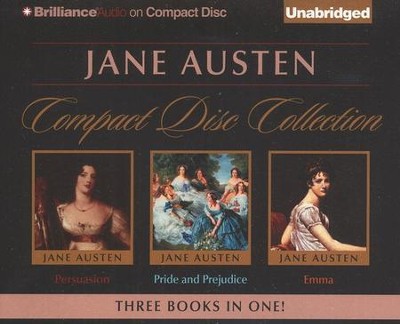 ▼▲
Pride and Prejudice: A delightful novel about "how girls catch husbands." Listen in to find out: What will happen to sister Lydia? Will the arrogant Lady Catherine de Burgh's intrigues be foiled? Will sister Jane marry Mr. Bingley? And especially, will Elizabeth, cured of her prejudice, and Mr. Darcy, cured of his pride, fall into each other's arms? Listeners will also savor the wit, the sly irony and satire and comedy that Miss Austen crowds into almost every quiet, well-bred line of this novel. There is great sanity, common sense and worldly wisdom to be found in her exploration of human nature. Sir Walter Scott said, Jane Austen had "that exquisite touch which renders ordinary commonplace things and characters interesting." This quality provides today's listeners of Pride and Prejudice with a fascinating trip into the lives of the privileged in England during the eighteenth century. Persuasion: Anne Elliot is a young woman of perfect breeding and unwavering integrity. Austen wrote of her, "She is almost too good for me." Persuasion is the story of Anne and Captain Wentworth and their long awaited union. The world of country gentry in Regency England serves as a setting while portraying the many aspects of proper society - its failings and humor. Jane Austen's works have enjoyed a resurgence in popularity since the success of several motion picture adaptations of her novels. She wrote the novels Pride and Prejudice, Mansfield Park, Northanger Abbey, Sense and Sensibility, and Emma. Emma: The funny and heartwarming story of a young lady whose zeal, snobbishness and self-satisfaction lead to several errors in judgment. Emma takes Harriet Smith, a parlour boarder and unknown, under her wing and schemes for advancement through a good marriage. The attempts at finding Harriet a suitor occupy all of Emma's time. However, in the midst of the search she settles on a most unlikely union with her own constant critic: Mr. Knightly. Jane Austen's works have claimed a renewed popularity and audience with the release of motion pictures Sense and Sensibility, Emma, and Clueless based upon Austen's classic novels. Emma was originally published in 1816.

▼▲
Jane Austen’s (1775-1817) works have enjoyed a renewed popularity in the last year with the film release of Pride and Prejudice and Sense and Sensibility - both critically acclaimed. Sir Walter Scott said, Jane Austen had “that exquisite touch which renders ordinary commonplace things and characters interesting.”

▼▲
I'm the author/artist and I want to review Jane Austen Unabridged CD Collection: Pride and Prejudice, Persuasion, and Emma.
Back
Back