Skip to main content
OUR BIGGEST BARGAIN SALE EVER: Over 6,000 deals at never-seen-before prices ~ through 8/23. Shop now >
The Auschwitz Journal: A Catholic Story from the Concentration Camps
Edited By: Fr. Julius D. Lelockzy O.Cist.
By: Klara Kardos
Stock No: WW604888 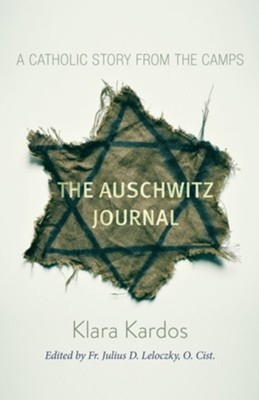 The Auschwitz Journal: A Catholic Story from the Concentration Camps

When Nazi Germany occupied Hungary in March 1944 violent persecution of the Jews began, including taking hundreds of thousands to concentration camps. It did not help Klara Kardos that she was Catholic: because of her Jewish background, she was also taken to Auschwitz in June of 1944 at the age of 24.

At the camp, younger women were not killed; they were taken to ammunition factories to do forced labor. Klara survived the horror of death camps and was liberated in May 1945. Years after her return to Hungary, at the request of her friends, she wrote down her camp experiences in a small book in the Hungarian language. This is her story.

▼▲
Kl&aacute;ra Kardos, a Hungarian Catholic woman of Jewish background, was born in 1920 and died in 1984. Her parents were Jewish but her mother converted to Catholicism before Kl&aacute;ra was born, and Kl&aacute;ra was baptized Catholic as a baby. She never married. She was an extraordinary individual, bright and well educated; she spoke several languages and wrote in Hungarian in a beautiful literary style. After her liberation from the concentration camp, for years she lived in communist Hungary. During the 1970s, she immigrated into neighboring Austria and there she dedicated her life to the service of the Catholic Church by writing, translating, editing religious literature. She did this until her death at the age of 64 from brain cancer.

Fr. Julius D. Leloczky, O.Cist. is a Cistercian monk and priest, born in Hungary, who immigrated into the U. S. in 1964. He lives at the Cistercian Abbey Our Lady of Dallas, and taught in the abbey preparatory school for over 40 years, until his retirement in 2011.

▼▲
I'm the author/artist and I want to review The Auschwitz Journal: A Catholic Story from the Concentration Camps.
Back