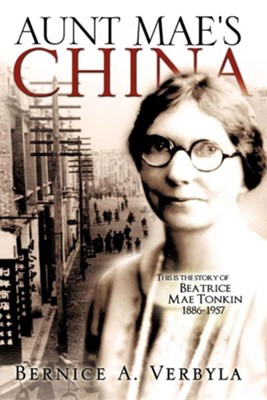 Why would a young woman give up a nursing career, a marriage proposal, and her family to head for South China, thousands of miles from home, where few had gone before?

In the middle of World War I, when the United States Navy was heading to the Mediterranean to offer support to England and France, Beatrice Mae Tonkin was boarding a boat to take her in the opposite direction across the Pacific to the Kwangsi (Guangxi) province where she would spend most of the next twenty-seven years and where her life would be filled with dangerous adventures as she pioneered answering God's call.

Hated by the Chinese who thought she and her colleagues were masquerading as foreign imperialists, these so called "foreign devils" risked life and limb for the Master, while Mao and the Chinese Communist Party, a few provinces away, were preparing for their clever takeover of China.

As Aunt Mae's life story unravels, you learn it is juxtaposed with extraordinary encounters of danger and hardships between the years of 1917-1944, when China went through the reign of river pirates, corrupt warlords, dangerous philosophies, rogue armies, Japanese bombings, effects of WWII, the vicious actions of the CCP, and epidemics, but she remained undaunted in her task of carrying out the Great Commission of Jesus Christ and continued planting the seeds of Christianity until she was forced to leave.

▼▲
I'm the author/artist and I want to review Aunt Mae's China.
Back