We are OPEN and SHIPPING - click here for shipping estimates
Augustus to Constantine: The Rise and Triumph of Christianity in the Roman World
By: Robert M. Grant 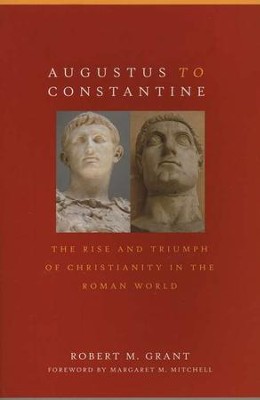 Augustus to Constantine: The Rise and Triumph of Christianity in the Roman World

▼▲
A masterful study of early Christianity as it spread beyond Palestine into the Greco-Roman world. Beginning in A.D. 14 and ending in A.D. 337, Grant's classic work explores the religious, political, and cultural developments that transformed a Jewish sect's faith into the Roman Empire's state religion. Updated with a new foreword by Margaret Mitchell. 392 pages, softcover from Westminster/John Knox.

This masterful study of the early centuries of Christianity vividly brings to life the religious, political, and cultural developments through which the faith that began as a sect within Judaism became finally the religion of the Roman empire. First published in 1970, Grant's classic is enhanced with a new foreward by Margaret M. Mitchell, which assesses its importance and puts the reader in touch with the advances of current research.

▼▲
Robert M. Grant is Professor Emeritus of New Testament and Early Christianity at the University of Chicago Divinity School in Chicago, Illinois. He is a renowned authority on the history of early Christianity.

▼▲
I'm the author/artist and I want to review Augustus to Constantine: The Rise and Triumph of Christianity in the Roman World.
Back
×
Back
×