Skip to main content
SPRING CYBER EVENT STARTS NOW: And it's a really BIG deal! Up to 88% off through 5/24>
Augustine's Way Into the Will: The Theological and Philosophical Significance of de Libero Arbitrio
By: Simon Harrison
Stock No: WW269847 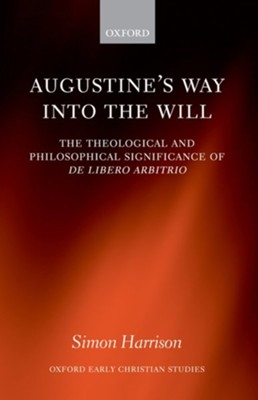 Augustine's Way Into the Will: The Theological and Philosophical Significance of de Libero Arbitrio

▼▲
An original account of Augustine's theory of will, based on a close reading of his pivotal and fundamental text, the dialogue On Free Choice. Simon Harrison takes Augustine's philosophical arguments and literary form seriously and so reveals a way of thinking about the will that is grounded in
the individual reader's response. He shows the centrality of Augustine's philosophical method, his 'way in to the will', as opposed to the construction of a monolithic 'theory of will'. Harrison relates the argument of On Free Choice to other key texts of Augustine's, in particular the City of God
and the Confessions, and rehabilitates a widely read but often misinterpreted book to show the importance of Augustine as a major philosopher.

Simon Harrison was formerly a Research Fellow of St John's College, Cambridge, and is currently training in medicine.

▼▲
I'm the author/artist and I want to review Augustine's Way Into the Will: The Theological and Philosophical Significance of de Libero Arbitrio.
Back