Skip to main content
Augustine's Strategy as an Apologist
By: Eugene Teselle
Stock No: WW998715 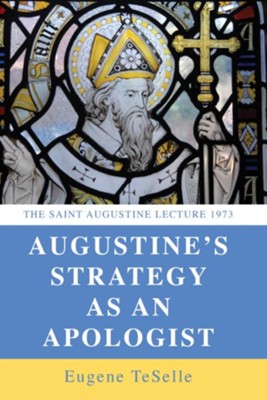 Augustine's Strategy as an Apologist

▼▲
In this Saint Augustine Lecture, Professor TeSelle draws together from the various writings of Augustine the major themes in his approach to non-Christians. Highlighting Augustine's emphasis upon the moral and personal attractions of the Christian life that go beyond mere argumentation, he examines three successive concerns. During the years following his conversion, Augustine appealed to those who had some philosophical knowledge and tried to show how Christianity fulfills and puts into effect their highest aspirations. Then during the period between 399 and 410 he joined in the Empire's attack upon pagan religion, adding to his moral and intellectual claims a fateful justification of religious persecution. And at the last, in The City of God, he discovered that he must acknowledge the shortcomings, and not merely celebrate the glories, of ""Christian times."" It is here, Professor TeSelle suggests, that Augustine's apologetics comes to its appropriate climax--and perhaps speaks most eloquently to our contemporary situation. Eugene TeSelle was educated at the University of Colorado, Princeton Theological Seminary, and Yale University. After teaching in the Department of Religious Studies at Yale University, he came to Vanderbilt in 1969. At Vanderbilt he has been Chair of the Faculty Senate and President of the AAUP Chapter. He has been active in social justice issues in Nashville, has administered several grant projects in the community, and is an editor of Southern Communities. A minister in the Presbyterian Church, he is currently president of the Witherspoon Society, the ""progressive caucus."" He is also the author of Augustine the Theologian, Christ in Context, Thomas Aquinas: Faith and Reason.

▼▲
I'm the author/artist and I want to review Augustine's Strategy as an Apologist.
Back