We are OPEN and SHIPPING - click here for shipping estimates
PRE-SUMMER CYBER SALE EXTENDED thru 6/1 ~ Over 2,500 items up to 90% off
Augustine's Invention of the Inner Self: The Legacy of a Christian Platonist
By: Phillip Cary 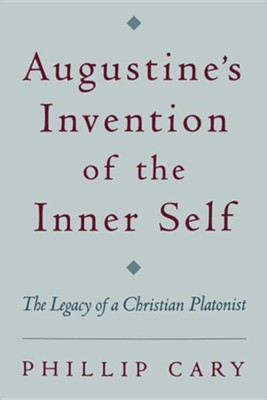 Augustine's Invention of the Inner Self: The Legacy of a Christian Platonist

▼▲
In this book, Phillip Cary argues that Augustine invented the concept of the self as a private inner space-a space into which one can enter and in which one can find God. Although it has often been suggested that Augustine in some way inaugurated the Western tradition of inwardness, this is the first study to pinpoint what was new about Augustine's philosophy of inwardness and situate it within a narrative of his intellectual development and his relationship to the Platonist tradition.
Augustine invents the inner self, Cary argues, in order to solve a particular conceptual problem. Augustine is attracted to the Neoplatonist inward turn, which located God within the soul, yet remains loyal to the orthodox Catholic teaching that the soul is not divine. He combines the two emphases by urging us to turn "in then up"--to enter the inner world of the self before gazing at the divine Light above the human mind.
Cary situates Augustine's idea of the self historically in both the Platonist and the Christian traditions. The concept of private inner self, he shows, is a development within the history of the Platonist concept of intelligibility or intellectual vision, which establishes a kind of kinship between the human intellect and the divine things it sees. Though not the only Platonist in the Christian tradition, Augustine stands out for his devotion to this concept of intelligibility and his willingness to apply it even to God. This leads him to downplay the doctrine that God is incomprehensible, as he is convinced that it is natural for the mind's eye, when cleansed of sin, to see and understand God.
In describing Augustine's invention of the inner self, Cary's fascinating book sheds new light on Augustine's life and thought, and shows how Augustine's position developed into the more orthodox Augustine we know from his later writings.

Dr. Phillip Cary is Director of the Philosophy Program at Eastern College in St. Davids, Pennsylvania, where he is also Scholar-in-residence at the Templeton Honors College.

"Others have long said that certain notions of 'self' had their origin in Augustine, but Cary's study is much more precise. He describes developments in the great bishop's thought with precision and careful documentation, and his general arguments deserve a wide hearing."--BIBLIOTHECA SACRA,, July-September 2002
"The book is complex, carefully argued, helpfully outlined in chapter summaries and mercifully well cross-referenced. It leaves one grateful for a profounder acquaintance with Augustine's thought and heritage."--IJournal of the American Academy of Religion
"A challenging, thoughtful book. Cary writes extremely well: his prose is lean and extraordinarily lucid, his style informal yet serious, his authorial persona gracious and self-effacing, his efforts at fair judgement admirable."--Spiritus: A Journal of Christian Spirituality
"...a first-rate study of the influences on the great bishop and the innovations he made to his intellectual/spiritual inheritance."--Theology Today
"A valuable and important book, both for those interested in Augustine's thought, and for those wanting, as Augustine wanted, to think Christian thoughts about matters of philosophical interest...[Cary's] richly textured depiction of how a particular Christian at a particular time--Augustine at the end of the fourth century--actually thought, has some important lessons to teach"--Faith and Philosophy, Journal of the Society of Christian Philosophers
". . . a rich book that offers genuinely fresh material. It should be of interest to all students of Augustine and the classical heritage of Christianity."--Journal of Religion

▼▲
I'm the author/artist and I want to review Augustine's Invention of the Inner Self: The Legacy of a Christian Platonist.
Back
×