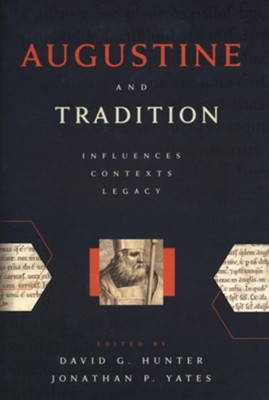 Augustine towers over Western life, literature, and culture—both sacred and secular. His ideas permeate conceptions of the self from birth to death and have cast a long shadow over subsequent Christian thought. But as much as tradition has sprung from Augustinian roots, so was Augustine a product of and interlocutor with traditions that preceded and ran contemporary to his life.

This extensive volume examines and evaluates Augustine as both a receiver and a source of tradition. The contributors—all distinguished Augustinian scholars influenced by J. Patout Burns and interested in furthering his intellectual legacy—survey Augustine’s life and writings in the context of North African tradition, philosophical and literary traditions of antiquity, the Greek patristic tradition, and the tradition of Augustine’s Latin contemporaries. These various pieces, when assembled, tell a comprehensive story of Augustine’s significance, both then and now.

▼▲
David G. Hunter is the Margaret O'Brien Flatley Chair of Catholic Theology at Boston College. A past president of the North American Patristics Society, he is the author of several monographs and coeditor of the Oxford Handbook of Early Christian Studies.

Jonathan P. Yates is professor of historical theology at Villanova University. In addition to coediting a two-volume handbook entitled The Bible in Christian North Africa, he served as editor of the international peer-reviewed academic journal Augustinian Studies for over ten years.

▼▲
"So vast is the space that Augustine occupies in Christian memory that few recognize he stands in the midst of a cloud of witnesses. Anyone who has studied Augustine has pondered how he came to be the churchman and thinker we know from his many books, essays, and sermons. In this collection of original essays on Scripture and liturgy, North African writers like Tertullian, Greek philosophers like Plato, Eastern Christian thinkers like Origen, and Latin bishops like Ambrose, the reader will be introduced to the lively spiritual and intellectual world that nourished Augustine's theological imagination."
— Robert Louis Wilken
University of Virginia

"This book may deal with Augustine and tradition, but it does not construe tradition as in any way restrictive. The distinguished contributors deftly place Augustine amid his intellectual networks, Latin and Greek, Christian and otherwise: each essay develops a new facet of the picture. The collection overall is a magnificent tribute to a scholar, Patout Burns, who has devoted his career to seeking out the dignified beauty of pattern in Augustine’s thought and beyond."
— Catherine Conybeare
Bryn Mawr College

"The intellectual tradition of Western Christianity owes more, arguably, to Augustine of Hippo than to any other single figure. This collection of essays on his thought, by fifteen of today’s most recognized North American Augustine scholars, brings together substantive new reflections on most major aspects of his thought, offering not simply surveys of current Augustinian scholarship but also new ways forward in evaluating his contributions. It is perhaps the most significant new book in English on Augustine’s theology to appear in the last twenty years—an indispensable contemporary accompaniment to reading the works of the saint himself!"
— Brian E. Daley, SJ
University of Notre Dame

"Patout Burns is fittingly honored by this impressive collection. Contributors follow his example of wide knowledge, clear writing, and attention to context and to development of thought. Each essay provides stimulus for specialists and could also serve as an introduction to central topics in research on Augustine."
— Gillian Clark
University of Bristol

"Augustine’s homecoming may be second only to Odysseus’s in Western imaginations of Mediterranean travel, yet his own narrative in the Confessions does not quite see him home. Seeing Augustine home, finding him there—in the company he kept, in the transactions of his intellectual, affective, and public life—is a task modern scholarship has set itself. Augustine and Tradition advances it in style. Brimming with an impatience like Augustine’s, these essays unsettle ’tradition’ in ways to enliven our sense of what passes under that familiar metaphor."
— Mark Vessey
University of British Columbia

"Patout Burns has been a central figure in the study of Augustine for decades—writing across a range rich and broad and mentoring so many of us who study the Doctor of Grace. Patout’s work has always placed Augustine in the context of broader traditions: drawing out, in one direction, Augustine’s debts to (and re-readings of) his North African forebears—while, in another direction, exploring Augustine’s revolutionary exploration of grace and human freedom against the background of later western medieval developments. This fascinating and substantial volume is the perfect tribute. Many of its essays, produced by an impressive list of major figures, will become regular readings when teachers search for scholarly, clear, and incisive treatments of Augustine’s place in the Christian tradition. It is a must for all our libraries, personal and institutional."
— Lewis Ayres
Durham University

"Augustine is not just a part of tradition. He constitutes a pivotal center towards which traditions converge and from whom they emerge channeled into new, groundbreaking directions. Augustine and Tradition reminds us in a most enlightening and persuasive way of the fact that Western culture as we know it only exists because of Augustine’s essential and unique formation of its traditions. That the volume is dedicated to J. Patout Burns is a worthy tribute to him and a momentous contribution to Augustinian studies as a whole."
— Hubertus R. Drobner
University of Paderborn, Germany

"Augustine loved to cover his tracks, writing for the most part without footnotes. The astute corps of detectives brought together in this volume draw on the best modern scholarship to bring those tracks to life and give us a refreshed view of Augustine and the currents of thought from his world that influenced him most. Augustine’s power as a thinker and writer was such that even when his secrets are revealed, he stands forth if anything more impressive than before."
— James J. O’Donnell
Arizona State University

"Augustine and Tradition offers surprising insights in the multifaceted and multilayered richness of the worlds in which Augustine received and processed the ideas of African and international philosophers and theologians. In doing so, this book shows in a stimulating way the contours of Augustine’s original contribution to Christianity in respect for the tradition to which he felt indebtedness. This book is a great tribute to J. Patout Burns, who has paved new academic lines of research with regard to both Augustine and his predecessors!"
— Mathijs Lamberigts
Katholieke Universiteit Leuven, Belgium

CHOICE
"Though many treatments of Augustine include a retrospective look at his predecessors, precious few volumes are devoted entirely to this subject. The present volume, especially given the established reputation of most of its contributors, fills this lacuna, making this book required reading for the study of St. Augustine’s thought. . . . Essential."

▼▲
I'm the author/artist and I want to review Augustine and Tradition: Influences, Contexts, Legacy.
Back
Back