Skip to main content
Augustine and the Problem of Power
Edited By: David Beer
By: Charles Norris Cochrane
Stock No: WW294244 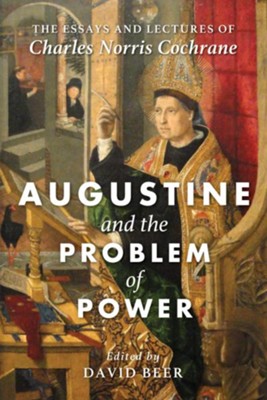 Augustine and the Problem of Power

▼▲
More than seventy years after his untimely death, this collection of essays and lectures provides the first appearance of Charles Norris Cochrane's follow-up to his seminal work, Christianity and Classical Culture. Augustine and the Problem of Power provides an accessible entrance into the vast sweep of Cochrane's thought through his topical essays and lectures on Augustine, Roman history and literature, Niccolo Machiavelli, and Edward Gibbon. These shorter writings demonstrate the impressive breadth of Cochrane's mastery of Greek, Roman, and early Christian thought. Here he develops the political implications of Christianity's new concepts of sin and grace that transformed late antiquity, set the stage for the medieval world that followed, and faced the reactions of the Renaissance and Enlightenment. Cochrane analyzes the revival of classical thought that animated Machiavelli's politics as well as Gibbon's historiography. Written amid the chaos and confusion of depression and world war in the twentieth century, Cochrane's writings addressed the roots of problems of his own ""distracted age"" and are just as relevant today for the distractions of our own age. ""To have available these essays of Charles Norris Cochrane is a belated treasure. Few people understood the relation of culture to politics, religion, and economics better than he. He understood the abiding realities of historical origins as well as the unique place of Augustine in the more general question of the meaning of history."" --R03;James V. Schall, SJ, Professor Emeritus, Georgetown University ""The devotion of Charles Norris Cochrane's granddaughter, Margaret Phillips, and the hard work of the editor, David Beer, allied to assemble several of Cochrane's shorter works along with material excised by the Oxford University Press from Christianity and Classical Culture. This collection will re-introduce to the world of scholarship one of the most original and comprehensive minds of the early twentieth century. The author's beautifully written evocation of both Augustine's detachment from, and his engagement with, politics at a time when the received order of Rome was under successful attack is the subject matter of the title piece, originally given as a lecture series at Yale in 1945, shortly before Cochrane's death. His exposition of Augustine's distinction between nature and grace and his comparison with equivalent distinctions in Plato combines the serenity of a scholar who knows his sources with a keen awareness of the imperfections of politics as evident in 1945 as it was to Augustine 1500 years earlier."" --Barry Cooper, Professor of Political Science, University of Calgary ""Charles Cochrane's contribution to scholarship endures because he was willing to go behind the texts to the animating experiences from which they arose. It was in this way that he put us in touch with an ancient world whose problems were not so remote from our own. His guide to those common challenges was the inexhaustible mind of Augustine who taught us to see everything in relation to the mind of God. To have, besides the towering achievement of Christianity and Classical Culture, the companion pieces that David Beer has so expertly edited here, is an occasion for considerable rejoicing. It is a welcome resource for all of us who must continue to reflect on the role of Christianity within the history of order."" --David Walsh, The Catholic University of America ""Although sometimes overshadowed by his Toronto colleagues, including Harold Innis, Frank Underhill, and Donald Creighton, Charles Cochrane was a brilliant classicist whose 1940 book, Christianity and Classical Culture, enriched our understanding of Western history. His sudden death five years later robbed the academic world of an important thinker at the height of his career. Representing years of love and scholarly labor on the part of David Beer, Augustine and the Problem of Power brings that powerful

▼▲
I'm the author/artist and I want to review Augustine and the Problem of Power.
Back