Skip to main content
Saint Augustine on Genesis: Two Books on Genesis Against the Manichees and on the Literal Interpretation of Genesis: An Unfinished Book
By: Roland J. Teske
Stock No: WW210889 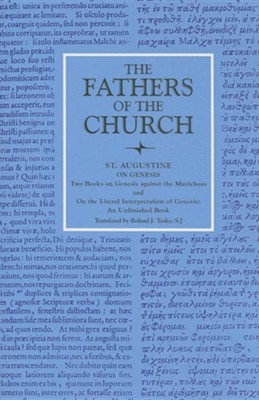 Saint Augustine on Genesis: Two Books on Genesis Against the Manichees and on the Literal Interpretation of Genesis: An Unfinished Book

By: Roland J. Teske
More in Fathers of the Church Patristic Series
Catholic University of America Press / 1990 / Paperback
Write a Review
In Stock
Stock No: WW210889
Buy Item Our Price$45.00
In Stock
Quantity:
Stock No: WW210889
Catholic University of America Press / 1990 / Paperback
Quantity:
Add To Cart
of These in Your Cart

▼▲
Augustine's Two Books on Genesis against the Manichees and On the Literal Interpretation of Genesis: An Unfinished Book represent the first two of five explanations of the beginning of the Book of Genesis that he undertook between 388 and 418. In the first, a commentary on Genesis 1-3, Augustine counters the ignorant and impious attacks against Scripture by the Manichees, with whom he was a ""hearer"" for nine years. The second would have been a hexaemeron, a commentary on the six days of creation, but, as Augustine admits, his inexperience in scriptural exegesis collapsed under the weight of the burden, ""and before I finished one book, I gave up the labor that I could not sustain."" Although Augustine agrees that many things in Scripture may seem absurd to the unlearned, he holds that they can produce great pleasures once they have been explained. It was this tenet, realized in his spiritual rather than corporeal interpretation of Scripture, that led him to counter the impious attacks the Manichees used to attract those who sought a more intellectual understanding of God over and against an anthropomorphic view. Augustine's brilliant assimilation of Christian revelation and the intellectual faith of the Neoplatonic circle around Ambrose in Milan gave rise to his ""spiritual"" interpretation of Genesis 1-3 in the Two Books on Genesis against the Manichees. In On the Literal Interpretation of Genesis: An Unfinished Book, Augustine succeeds in presenting an ad litteram interpretation for twenty-five verses before arriving at the difficult verse on man's having been made to God's image and likeness. At this point he breaks off because, in the words of John O'Meara, ""it either tended to blasphemy or could not be reconciled with the Catholic faith."" Perhaps because he later writes that he considers his literal attempt to interpret Genesis a failure, the texts herein translated have become today, in light of modern scriptural studies, fascinating and invaluable examples of Augustine's developing thought on significant philosophical and theological issues in the interpretation of Genesis.

▼▲
I'm the author/artist and I want to review Saint Augustine on Genesis: Two Books on Genesis Against the Manichees and on the Literal Interpretation of Genesis: An Unfinished Book.
Back