Come August, Come Freedom: The Bellows, the Gallows, and the Black General Gabriel
By: Gigi Amateau 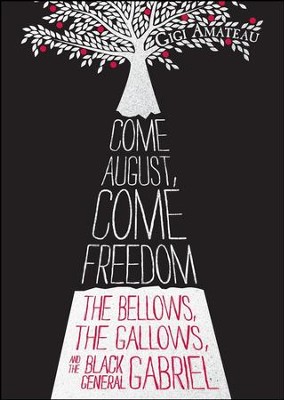 Come August, Come Freedom: The Bellows, the Gallows, and the Black General Gabriel

In a time of post-Revolutionary fervor in Richmond, Virginia, an imposing twenty-four-year-old slave named Gabriel plotted a rebellion involving thousands of African- American freedom seekers armed with refashioned pitchforks and other implements of Gabriel’s blacksmith trade. The revolt would be thwarted by a confluence of fierce weather and human betrayal, but Gabriel retained his dignity to the end. Interwoven with original documents, this poignant, illuminating novel gives a personal face to a remarkable moment in history. This edition includes extensive research notes on the story behind the plot.

▼▲
Amateau’s prose is appropriately passionate, but it’s tempered with disciplined restraint and moments of startling delicacy. Although the subject of this title will call to historical fiction readers who appreciate such thoughtful works as M. T. Anderson’s Octavian Nothing (BCCB 11/06), teens who approach history with the poetic insight of Marilyn Nelson will also find Amateau’s chronicle rewarding.
—Bulletin of the Center for Children's Books (starred review)

Based on a true story of planned rebellion by “Prosser’s Gabriel,” Amateau deftly tucks well-researched period documents into the narrative at opportune moments. Her use of language is both startling and gratifying . . . an anguished tale told with poetry and heart.
—Kirkus Reviews

In this beautifully written novel, Amateau makes Gabriel a fully realized character fighting not just for an abstract ideal of liberty but also for the freedom of Nanny and their future family. Amateau also makes good use of primary sources, sprinkling actual documents throughout the text. As did M. T. Anderson in his Octavian Nothing volumes (rev. 9/06; 9/08) and Kimberly Brubaker Bradley in Jefferson’s Sons (rev. 1/12), Amateau takes a long look at the tricky business of liberty in a new nation dedicated to freedom.
—Horn Book

The thrilling role of the unrecognized young hero will grab teen readers.
—Booklist

▼▲
I'm the author/artist and I want to review Come August, Come Freedom: The Bellows, the Gallows, and the Black General Gabriel.
Back
×