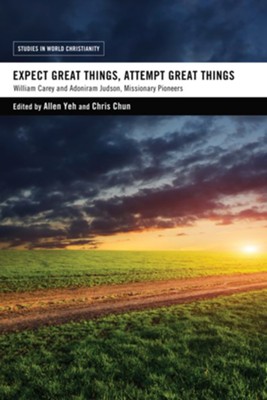 ▼▲
William Carey, often dubbed "The Father of Modern Missions," and Adoniram Judson, America's first intercontinental missionary, were pioneers whose missions overlapped in chronology, geography, and purpose. However, rarely are they both featured in the same volume or compared and contrasted. Here we have unique material by some of the world's leading experts on these two giants of missionary history, with perspectives on these men in ways never seen before. Especially relevant to this current age of World Christianity are the perspectives from India and Burma, the lands which received these men for their missionary enterprise.

▼▲
Allen Yeh is Associate Professor of Intercultural Studies and Missiology at Biola University near Los Angeles, California. He is the co-author of Routes and Radishes and Other Things to Talk About at the Evangelical Crossroads (2010). Chris Chun is Associate Professor of Church History at Golden Gate Baptist Theological Seminary near San Francisco, California. He is the author of The Legacy of Jonathan Edwards in the Theology of Andrew Fuller (2012).