Skip to main content
SPRING CYBER EVENT STARTS NOW: And it's a really BIG deal! Up to 88% off through 5/24>
Attempt Great Things for God: Theological Education in Diaspora
By: Chloe T. Sun
Stock No: WW878427 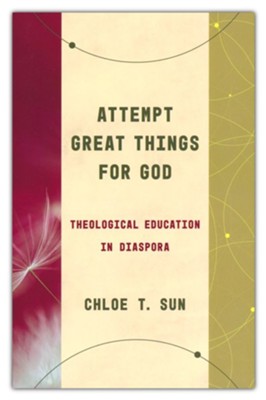 While the narrative of decline haunts churches and seminaries in the United States, there is great hope to be found in the explosive growth of Christian populations in Latin America, Africa, and Asia. In light of this, much can be learned from points of intersection between the minority and majority worlds, such as Logos Evangelical Seminary, an ATS-accredited Chinese-language seminary in California—the first in the US. Chloe Sun makes the case here for why an ethnic seminary like Logos has much to teach us about the evolving possibilities for theological education in a society of cultural exchange, with many populations living in diaspora.

Sun, a professor of Old Testament at Logos, has herself been formed by an array of cultural influences. She was raised by Chinese parents who were born in Vietnam, she grew up hearing multiple languages, and she has lived in three countries: China, Hong Kong, and the United States. With this unique background, she recognizes and extols the richness of pluralism, recognizing in it the work of God, akin to the diversity instantiated at the biblical Pentecost event.

The title of this book comes from Logos’s motto: "Attempt great things for God; rescue millions of souls." In this spirit, Sun’s vision is one of both humility and ambition, which begins by honoring the particularity of a person or group of people, and then moves outward to the universal, all-inclusive movement of the Holy Spirit.

▼▲
Chloe T. Sun is professor of Old Testament at Logos Evangelical Seminary, the first fully accredited seminary in the United States that is dedicated to communities of Mandarin speakers. Sun is the author of eight books. A prominent leader in the global Chinese Christian community, she publishes in both Chinese and English.

▼▲
Praise for the TEBT series:

"At once visionary and realistic, the books in this series offer fresh, short, and very different answers to the question, ’What is theological education for?’ Studies of that question have appeared every couple of decades and seem to assume that ’one-size-fits-all’ answers are possible. What’s new and groundbreaking here is that a group of theological educators from a broad array of very different religious traditions address the question in conversation with one another and in light of the changing place of faith communities in contemporary culture."
— David H. Kelsey
Yale Divinity School

"The authors of this series invite us into an exercise of the imagination—to let loose of the theological school models we know so well and instead craft ways that we teach and learn as if we are living in the new Jerusalem. This is daring work. Will we have the will to grasp it? I encourage you to read and see."
— Emilie M. Townes
Vanderbilt University Divinity School

"I would be hard-pressed to name any other resource that even approaches this series in its visionary outlook and wide perspective on the challenges and opportunities currently facing theological education. The authors represent an unparalleled selection of leaders in theological education whose views and experiences point to different paths into the future, all leading to true excellence and relevance in theological education."
— Justo L. Gonz&aacute;lez
author of The History of Theological Education

"At a time of massive changes in churches and theological schools, as well as in society generally, the twelve-book series Theological Education between the Times presents an indispensable resource. Many people, especially younger generations, question as never before the necessity of religious practice or even belonging to a congregation. In this new context, the repercussions for theological education are many: What adjustments must leaders make to maintain support? How can faculty modify programs to meet the demands of modern times? What message will attract prospective students? Astute theological educators from diverse backgrounds prayed together and engaged in conversations that contributed to the authorship of this lucid and compelling series intended for anyone concerned about the fate of religion in society."
— Katarina Schuth, OSF
Saint Paul Seminary School of Divinity

"This book will make you experience the magnificently powerful testimony of how Holy Spirit shapes and works on an individual and institution to glorify God's kingdom, while serving as the lodestar leading to fruitful diasporic theological education in the time in between times."
— Stephen Lee
former Chairman of the Board at Logos Evangelical Seminary

▼▲
I'm the author/artist and I want to review Attempt Great Things for God: Theological Education in Diaspora.
Back
Back