Skip to main content
Attack of the Spider Bots - eBook
By: Robert West
Stock No: WW3668EB 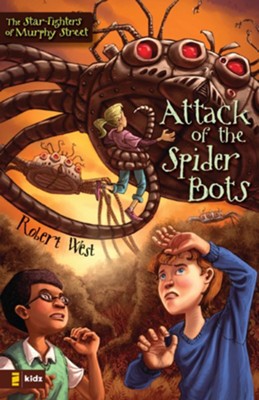 Attack of the Spider Bots - eBook

By: Robert West
More in Star-Fighters of Murphy Street Series
Zondervan / 2009 / ePub
Write a Review
In Stock
Stock No: WW3668EB

▼▲
When Beamer, Ghoulie, and Scilla take a shortcut home from school, they're chased by a horrible Cyclops-like creature. Entering a cavern, they find an amazing miniature world where everything's animated. But who's at the controls? Searching for the mastermind of this mini-universe leads them on a wild adventure and the discovery of a terrible secret! Recommended for ages 8 to 12.

The Star-Fighters of Murphy Street are Beamer, a California transplant to a weird Midwestern town, Scilla, the gangly tomboy next door, and Ghoulie, the class nerd. They have a spaceship-shaped tree house that's capable of taking them most anywhere in the universe! Hop in and blast off for fantastic outer space adventures in Star-Fighters of Murphy Street--the quirky, funny, fast-paced new trilogy by Robert West.

▼▲
Know Your Star-FightersBeamer: California transplant to a weird Midwestern town. Feels like he’s living on another planet. Scilla: the gangly tomboy next door. Ghoulie: the class nerd. Add one spaceship-shaped tree house capable of taking them most anywhere in the universe. Hop in and blast off for fantastic outer space adventures in Star-Fighters of Murphy Street—the quirky, funny, fast-paced new trilogy by Robert West.Taking a shortcut home from school, the Star-Fighters are chased by a horrible one-eyed creature into a cavern that houses an entire miniature world. Everything is animated—cars, trucks, moon, clouds, stars—but no one is at the controls. Who would make such a thing and then abandon it?The Star-Fighters’ search leads them on a wild adventure to a palatial mansion within a wintry jungle that hides a terrible secret—a secret that defines the limits of trusting God.

▼▲
Rob West doesn't just write about tree ships. He sometimes retreats to write in the flying ship he built in his own back yard--it's the only place he can escape his wife, three sons (and their cronies), two dogs, three cats, two doves . . . and, when she chooses to drop in out of the sky, a duck!

▼▲
I'm the author/artist and I want to review Attack of the Spider Bots - eBook.
Back
Back