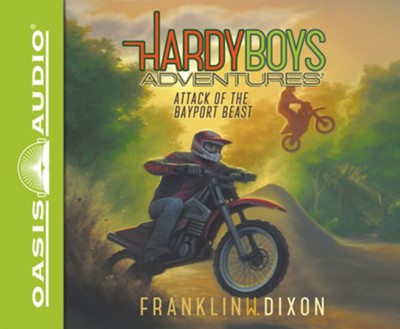 Attack of the Bayport Beast - unabridged audio book on CD

▼▲
The legend of the Bayport Beast has haunted the town for almost a century. Each summer brings rumors of gigantic Sasquatch creature roaming the nearby woods.However, this summer brings more sightings than usual, causing all kinds of people to lock to town, including a few UFO enthusiasts who are convinced the beast could be some kind of stranded alien. More than that, the sightings cause a media blitz!

Frank and Joe have never believed in the Bayport Beast, but when Frank catches a glimpse of a furry creature running through the woods, he changes his mind fast. And when reports surface of the beast attacking people, including a few friends, the Hardy brothers are on the case! After Frank and Joe are cornered by not one but three fearsome creatures, they have to wonder: is the Bayport Beast real after all? And is it multiplying?

▼▲
A twig cracked. I snapped my head to the side, following the direction of the sound, and peered through the greenery. There was nothing there.

As I began to turn back around, I caught the slightest motion out of the corner of my eye.

Peeking out between clumps of dense vegetation, about twenty feet away, were two eyes. My skin prickled when I realized that they were staring back at me.

▼▲
I'm the author/artist and I want to review Attack of the Bayport Beast - unabridged audio book on CD.
Back
Back