Skip to main content
Atonement: The Person and Work of Christ
Edited By: Robert T. Walker
By: Thomas F. Torrance
Stock No: WW824588 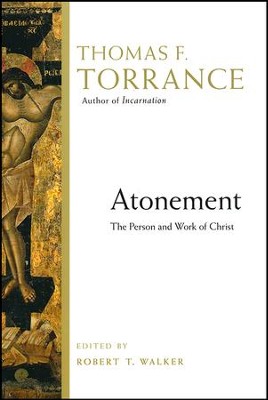 Atonement: The Person and Work of Christ

▼▲
This companion volume to T. F. Torrance's Incarnation: The Person and Life of Christ presents the material on the work of Christ, centered in the atonement, given originally in his lectures delivered to his students in Christian Dogmatics on Christology at New college, Edinburgh, from 1952-1978.

Like the first volume, the original lecture material has been expertly edited by Robert Walker, complete with cross-reference to Torrance's other works. Readers will find this the most readable work of Torrance and, together with Incarnation, the closest to a systematic theology we have from this eminent theologian.

This companion volume to T. F. Torrance's Incarnation: The Person and Life of Christ presents the material on the work of Christ, centered in the atonement, given originally in his lectures delivered to his students in Christian Dogmatics on Christology at New College, Edinburgh, from 1952-1978. Like the first volume, the original lecture material has been expertly edited by Robert Walker, complete with cross-reference to Torrance's other works. Readers will find this the most readable work of Torrance and, together with Incarnation, the closest to a systematic theology we have from this eminent theologian.

Thomas F. Torrance, MBE, (1913--2007) is recognized as one of the foremost theologians of the second half of the twentieth century. He served as professor of Christian dogmatics at New College, Edinburgh, for twenty-seven years and in 1978 was the recipient of the Templeton Prize for Progress in Religion. Torrance was also coeditor of the Scottish Journal of Theology.

▼▲
A worthy sequel to Torrance's magisterial lectures on the incarnation, this book takes us through a series of major themes in Christian theology with immense authority and clarity. Detailed exegetical study of the biblical meanings of substitution, clear teaching on the centrality of the resurrection and the church in a theology of redemption, and fresh thinking about the relation of divine and human agency in the writing of Scripture--these are just some of the treasures to be found here.
-Rowan Williams,
Archbishop of Canterbury

Continuing the exploration of the mystery of the Son of God begun in Incarnation, Torrance turns his attention in this second volume to the work of the incarnate Savior, with the purposiveness, analytical penetration and spiritual lucidity which mark him out as one of the most weighty dogmaticians of the modern Reformed tradition.
-John Webster,
University of Aberdeen

An invaluable resource for students of Torrance, and a highly stimulating resource for all interested in Christian theology. It will be hard to come away from this book without a feeling of having been enriched and challenged.
-Alister E. McGrath,
King's College, London

In this indispensable volume of rare insight and erudition, Thomas F. Torrance demonstrates once again why he is esteemed as one of the leading theologians of the twentieth century. Weaving together Old and New Testament conceptions, Torrance here lucidly, profoundly, thoroughly and compellingly explains how and why Christ's atoning death can be understood only soteriologically (not logically) on the ground of the incarnation, resurrection and ascension of Jesus himself. Throughout this book, Torrance powerfully conveys the meaning and significance of the deep mystery of Christ's death on the cross as an act of God, fulfilling the covenant both from the side of God for us and from the human side toward God in the person of his incarnate Son, Jesus Christ, by carefully connecting Christ's own self-understanding and activity with the activity of the Spirit sent by the Father and Son to guide the church in Word and sacrament until he returns. All who are interested in serious theology today should read this book.
-Paul Molnar,
St. John's University, New York

Good theologians can write learned books on the atonement. But it is a particular gift to write a learned book on the atonement that is also clear, accessible and passionate. T. F. Torrance's Atonement has these qualities and more. The book is deeply rooted in Scripture and in Christian tradition, and it consistently points the way to Christian living and ministry. This is a book that will be formative for seminary students and pastors, as well as all who seek to understand more richly the core of the faith.
-Leanne Van Dyk,
Western Theological Seminary

The posthumous publication of T. F. Torrance's New College lectures on soteriology is indeed an event. What is intended here is an account of the saving work of Christ which does justice to the full sweep of biblical testimony (Old Testament as well as New). What is achieved is something on the order of a model of models--an appropriation of the values resident in traditional ontological, forensic and moral models in an original synthesis that commands attention and respect. Torrance's stature as the leading Scottish theologian of the twentieth century will only be enhanced by these lectures, ably edited by Robert Walker.
-Bruce McCormack,
Princeton Theological Seminary

Nowhere else in T. F. Torrance's writings will you find the kind of synthesis of the entire sweep of his dogmatics as you will find in Incarnation and its companion volume, Atonement. Everyone concerned with constructive systematic theology in general, or with Torrance's theology in particular, will want to acquire and read these books. They reveal the heart and soul of Torrance's theological vision.
-Elmer Colyer,
University of Dubuque

This is a towering work that deserves to be read throughout the ecumenical churches, to whose renewal and imperative reunion it promises to make a vital contribution.
-George Hunsinger,
Princeton Theological Seminary

"This volume is a gift. It is carried out in deep awareness of God's grace towards humanity in Christ and his Spirit, likewise of the Bible, patristic theology, and John Campbell's work. The result is a theology of the atonement along the lines of Jesus' vicarious representation of humanity before God that avoids what Torrance considers to be crude theologies of the atonement, including penal substitution. It is now incumbant on the evangelical world to clarify its relationship to Torrance and to appropriate the best of his rich view of the atonment."

"Admirers of the theological work of Torrance will rejoice that his lectures on the Atonement have been commendably collected and edited in a form that does justice to the intent of Torrance."

▼▲
I'm the author/artist and I want to review Atonement: The Person and Work of Christ.
Back
Back