Skip to main content
From Heaven He Came and Sought Her: Definite Atonement in Historical, Biblical, Theological, and Pastoral Perspective - eBook
Edited By: David Gibson, Jonathan Gibson
Stock No: WW62284EB 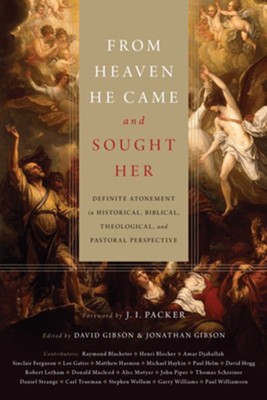 From Heaven He Came and Sought Her: Definite Atonement in Historical, Biblical, Theological, and Pastoral Perspective - eBook

▼▲
There is a palpable sense of confusion - and sometimes even embarrassment - with regard to so-called limited atonement today, pointing to the need for thoughtful engagement with this controversial doctrine. Incorporating contributions from a host of respected theologians, From Heaven He Came and Sought Her stands as the first comprehensive resource on definite atonement as it examines the issue from historical, biblical, theological, and pastoral perspectives.

There is a palpable sense of confusion—and sometimes even embarrassment—with regard to so-called limited atonement today, pointing to the need for thoughtful engagement with this controversial doctrine. Incorporating contributions from a host of respected theologians, From Heaven He Came and Sought Her stands as the first comprehensive resource on definite atonement as it examines the issue from historical, biblical, theological, and pastoral perspectives.

*The epub edition of this title will not display correctly when viewed on Adobe Digital Editions. Hebrew characters will be inaccurately displayed in this reader.

David Gibson (PhD, University of Aberdeen) is minister of Trinity Church in Aberdeen, Scotland. He is the coeditor of From Heaven He Came and Sought Her and the author of Living Life Backward: How Ecclesiastes Teaches Us to Live in Light of the End. He is married to Angela, and they have four children.

Lee Gatiss (PhD, University of Cambridge) is the director of church society and a lecturer in church history at Union School of Theology. He is assistant editor of The Global Anglican and on the editorial board of Studies in Puritanism and Piety. He has written and edited more than thirty books on the Bible, theology, and church history. He and his family serve at Christ Church, Cambridge in the UK.

Matthew S. Harmon (PhD, Wheaton College) is professor of New Testament studies at Grace Theological Seminary in Winona Lake, Indiana. He was previously on staff with Cru for eight years and is the author of several books. He also co-hosts the Various and Sundry podcast. Matthew and his wife, Kate, live in Warsaw, Indiana, and have two sons.

Alec Motyer (19242016) served as principal of Trinity Theological College in the United Kingdom, as well as pastor of several churches in England.

Stephen J. Wellum (PhD, Trinity Evangelical Divinity School) is professor of Christian theology at the Southern Baptist Theological Seminary in Louisville, Kentucky, and editor of The Southern Baptist Journal of Theology. Stephen and his wife, Karen, have five adult children.

J. I. Packer (19262020) served as the Board of Governors Professor of Theology at Regent College. He authored numerous books, including the classic bestseller Knowing God. Packer also served as general editor for the English Standard Version Bible and as theological editor for the ESV Study Bible.

Sinclair B. Ferguson (PhD, University of Aberdeen) is Chancellors Professor of Systematic Theology at Reformed Theological Seminary and the former senior minister of the First Presbyterian Church in Columbia, South Carolina. He is the author of several books, the most recent being By Grace Alone: How the Grace of God Amazes Me. Sinclair and his wife, Dorothy, have four grown children.

Robert Letham (PhD, University of Aberdeen) is professor of systematic and historical theology at Union School of Theology. A Presbyterian minister with twenty-five years of pastoral experience, he is the author of books such as The Work of Christ; The Holy Trinity; and Union with Christ, and a range of articles published in encyclopedias and journals.

John Piper is founder and lead teacher of desiringGod.org and chancellor of Bethlehem College & Seminary. He served for thirty-three years as the pastor for preaching and vision of Bethlehem Baptist Church in Minneapolis, Minnesota, and is the author of more than fifty books, including Desiring God; Dont Waste Your Life; and Reading the Bible Supernaturally.

▼▲
A massive product of exact and well-informed scholarship . . . with landmark significance. . .I give this book top marks for its range of solid scholarship, cogency of argument, warmth of style, and zeal for the true glory of God. I recommend it most highly.
-J. I. Packer,
Regent College

I cannot imagine that this book could have been published twenty-five years ago: there were not at that time enough well-informed theologians working in the Reformed heritage to produce a volume of such clarity and competence. Whatever side you hold in this debate, henceforth you dare not venture into the discussion without thoughtfully reading this book, which, mercifully, makes argument by stereotype and reductionism a great deal more difficult. Above all, this book will elicit adoration as its readers ponder afresh what Jesus achieved on the cross.
-D. A. Carson,
Trinity Evangelical Divinity School

The topic is worthy enough. Yet the lineup of contributors to this volume makes this, in my view, the most impressive defense of definite atonement in over a century. Beyond rehearsing traditional arguments, first-rate historical, biblical, and systematic theologians bring fresh angles and exegesis to bear. From Heaven He Came and Sought Heris a gift that will no doubt keep on giving for generations to come.
-Michael Horton,
Westminster Seminary California

This is the definitive study. It is careful, comprehensive, deep, pastoral, and thoroughly persuasive.
-David F. Wells,
Gordon-Conwell Theological Seminary

There is a conventional wisdom that seems to believe definite atonement is the weakest of the five heads of doctrine confessed at the Synod of Dort. But you may come away from this book believing it is the strongest, in its historical attestation, biblical basis, and spiritual blessing. Written by first-rate exegetes and theologians, this book covers all the difficult issues and emerges with a highly persuasive and attractive case. Highly recommended!
-John M. Frame,
Reformed Theological Seminary, Orlando

For whom did Christ die? This volume makes a fresh and impressively comprehensive case for definite atonement as the answer true to Scripture. It shows convincingly, through multi-authored contributions, (1) that the issues of the extent of the atonement and its nature cannot be separated - penal substitution, at the heart of why Christ had to die, stands or falls with definite atonement; and (2) how definite atonement alone provides for a gospel offer of salvation from sin that is genuinely free. In engaging various opposing views on this much-disputed topic, the editors seek to do so in a constructive and irenic spirit, an effort in which they and the other authors have succeeded admirably.
-Richard B. Gaffin Jr.,
Westminster Theological Seminary

This book is formidable and persuasive. Those familiar with the terrain will recognize that the editors know exactly the key issues and figures in this debate. And none of the authors who follow disappoint. The tone is calm and courteous, the scholarship rigorous and relentless, the argument clear and compelling. This penetrating discussion takes into account the major modern academic criticisms of definite atonement (Barth, the Torrances, Armstrong, Kendall, and others) as well as more popular critiques (Clifford, Driscoll and Breshears). An impressive team of scholars adorns this subject and aims to help Christians toward a deeper gratitude to God for his grace, a greater assurance of salvation, a sweeter fellowship with Christ, stronger affections in their worship of him, more love for people and superior courage and sacrifice in witness and service, and indeed to propel us into the global work of missions with compassion and confidence.
-J. Ligon Duncan,
Reformed Theological Seminary, Jackson, Mississippi

Whether you are sympathetic to or suspicious of definite atonement, this book will surprise you. Here are historical details, exegetical links, theological observations, and pastoral perspectives that are fresh and fascinating, even though there is also plenty that will prove controversial. From Heaven He Came and Sought Her offers the fullest and most nuanced treatment on definite atonement I know, and will richly add to the substance and quality of future conversations about the intent of the atonement. Whether you think that you agree or disagree with the authors, wrestling with these essays is well worth your time.
-Kelly M. Kapic,
Covenant College

▼▲
I'm the author/artist and I want to review From Heaven He Came and Sought Her: Definite Atonement in Historical, Biblical, Theological, and Pastoral Perspective - eBook.
Back
Back