We are OPEN and SHIPPING - click here for shipping estimates
When Athens Met Jerusalem: An Introduction to Classical and Christian Thought
By: John Mark Reynolds 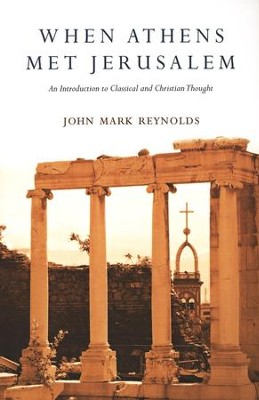 When Athens Met Jerusalem: An Introduction to Classical and Christian Thought

▼▲
A masterful introduction to the intellectual underpinnings of Western civilization---and a disturbing analysis of current trends that threaten those foundations. Surveying Greek and Roman thought, Reynolds weaves an ongoing dialogue between early classical ideas and those of Christianity, demonstrating that faith and reason are not opposed but work together under the direction of revelation.

▼▲
Christian theology shaped and is shaping many places in the world, but it was the Greeks who originally gave a philosophic language to Christianity. John Mark Reynolds's book When Athens Met Jerusalem provides students a well-informed introduction to the intellectual underpinnings (Greek, Roman and Christian) of Western civilization and highlights how certain current intellectual trends are now eroding those very foundations. This work makes a powerful contribution to the ongoing faith versus reason debate, showing that these two dimensions of human knowing are not diametrically opposed, but work together under the direction of revelation.

▼▲
(Ph.D., University of Rochester) is founder and director of the Torrey Honors Institute and professor of philosophy at Biola University, California. He is the coeditor (with J. P. Moreland) of

▼▲
John Mark Reynolds (Ph.D., University of Rochester) is founder and director of the Torrey Honors Institute at Biola University (a Great Books program for undergraduate students). A fellow of the Discovery Institute's Center for the Renewal of Science and Culture, Reynolds specializes in ancient philosophy, particularly ancient cosmology and the philosophy of religion.

▼▲
Christian theology shaped and is shaping many places in the world, but it was the Greeks who originally gave a philosophic language to Christianity. John Mark Reynolds's book When Athens Met Jerusalem provides students with a well-informed introduction to the intellectual underpinnings (Greek, Roman and Christian) of Western civilization and highlights how certain current intellectual trends are now eroding those very foundations. This work makes a powerful contribution to the ongoing faith-versus-reason debate, showing that these two dimensions of human knowledge are not diametrically opposed, but work together under the direction of revelation.

▼▲
"In the providence of God, Greek philosophy was available precisely at a time when the early church thought carefully about the Trinity, incarnation and other important topics.?For centuries, Jerusalem and Athens have been friends. But today there is suspicion and outright rejection of Greek thought in the church.?In my view, this attitude rests on confusion about Greek philosophy and its relationship to Christian teaching.?With the publication of When Athens Met Jerusalem, we finally have an authoritative guide to these themes. Reynolds's work is an interesting read, accessible to a nonspecialist, and teeming with content.?This book should be required reading for all undergraduates in Christian colleges, laypeople and pastors who need to be reacquainted with the important relationship between Jerusalem and Athens."

"To create the great civilization of Christendom, of which we are all the heirs, it was necessary to fuse the divine revelation given to the Hebrews (Jerusalem) with the philosophical brilliance of the Greeks (Athens). Now, in order to save the best elements of that civilization, those two great traditions must be united again. In this charming book, one of today's leading Christian educators explains how Christian thought has again become an exciting intellectual adventure."

Phillip E. Johnson, Professor of Law Emeritus, University of California--Berkeley, and author of Darwin on Trial and Reason in the Balance

"'Close to the truth,' ah, so close, writes John Mark Reynolds about one of the best ancient Athenian philosophers. That's what Athens has to do with Jerusalem. That's what Plato has to do with Christendom and eventually with Christianity today. The story of the origins of Christian thinking that Reynolds tells is not the one we often hear from the pulpit. There is no bashing of intellectuals, no rejection of the machinations of the mind in favor of the intuitions of the heart, no substitution of faith for the role of thinking. Reynolds himself was brought back to Christ through the reading of Plato's Republic. Astonishing? Yes, but read Plato as Reynolds does and it all makes sense. Written with the passion of a lover of truth and the Word of Truth found finally in Christ, this book will challenge any student of either the ancient Greek philosophers or the beliefs of the early church."

James W. Sire, author of The Universe Next Door and, with scientist Carl Peraino, Deepest Differences: A Christian-Atheist Dialogue

"This is a bold, original, salutary book, written with great passion, wonderful wit and deep love. Reynolds argues, convincingly I think, that Athens and Jerusalem, the classical and the Christian cultures, cannot live apart and are both in danger of perishing unless they are brought together in creative harmony. ?What is so unusual and so compelling about this appeal is that equal weight and equal appreciation are given to both classical learning and Christian faith. Reynolds has indeed accomplished the truly remarkable feat of replacing the ages-old deadlock between reason and revelation, or faith and reason, with a loving and respectful marriage between the two, and thus foretells of and foresees a new beginning for classical civilization and a revitalization of Christian teaching."

"It must be a treat to sit in John Mark Reynolds's classroom. In its verve and intelligence, When Athens Met Jerusalem is the next best thing. I wish I had read a book like this when I was a student. The need is even greater today, when even the teachers turn against reason, and every day makes clearer that Jerusalem is Athens's best friend."

J. Budziszewski, University of Texas at Austin, and author of The Line Through the Heart: Natural Law as Fact, Theory, and Sign of Contradiction

"John Mark Reynolds is the most stimulating lecturer on the interplay of classical and Christian thought I have ever heard.?I have been longing for him to write a book capturing his brilliant ideas on the topic.?It is a great blessing that this book has finally arrived--and When Athens Met Jerusalem does not disappoint.?It is one of the finest and yet most readable?treatments?ever in print."

"John Mark Reynolds writes with the artistry of a true poet and?the insight of a true scholar.?His passion for teaching shines through the pages of this book."

▼▲
"An excellent book. . .I recommend this resource for all who are in need of a resfresher on the importance of philosophical praxis in our Christian faith."
"A biblically solid introduction to the sometimes-deceptive thought of ancient Greece."
"It's one thing to read an introductory text which gives you the raw description or definition of a particular text or figure, but it's another task entirely to do a good job taking these bits of ancient history, and provide a description that makes ideas, figures, and texts come alive in their original conext; Dr. Reynolds does the latter. Ultimately, in developing this narrative, Dr. Reynolds not only seeks to provide a narrative description of the development of these ideas, but he also wants to highlight the influence of classical thought on the development of Christianity, while also arguing that the loss of this classical influence in modern Christianity has been detrimental. Definitely an intriguing read; check it out!"
"Philosophy of religion specialist and ancient cosmology expert presents the "intellectual underpinnings of Western civilization" and highlights current intellectual trends."
Listed in the article Ten Theology Books for Your Beach Bag.
"Reynolds has taught hundreds and hundreds (more than a thousand!) of three-hour discussion sessions on the great books since founding Torrey about thirteen years ago, and it must have been a monumental task for him to boil all that discourse down into a concise, focused volume like this one. But now the book for Normal People is here, and it is a zippy, compelling, witty, and accessible book written in common English instead of technical language."

▼▲
I'm the author/artist and I want to review When Athens Met Jerusalem: An Introduction to Classical and Christian Thought.
Back
×
Back
×