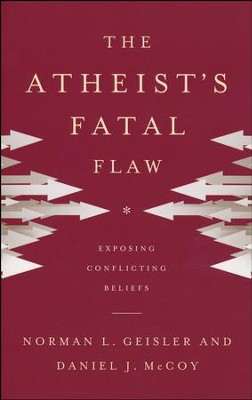 ▼▲
Most critiques of atheism focus on refuting head-on the claims of atheists. Instead, The Atheist's Fatal Flaw faithfully represents what atheists say they believe and stands back to watch as the natural inconsistencies in that worldview inevitably rise to the surface.

▼▲
In The Atheist's Fatal Flaw, Geisler and McCoy present the principle and contradicting theories of atheism. This is not your typical apologetics book: for Christians seeking a strong foothold in logic, reason, and faith, the authors show how little argument is actually needed to refute atheist claims. A must-have for your library.
-Josh D. McDowell

By allowing the atheists themselves to do the talking via the use of literally dozens of primary- source quotations, Geisler and McCoy repeatedly catch these skeptics in their own humanistic nets. It often seems to be assumed that Christians must answer the most pointed questions on these topics, but Geisler and McCoy take the offensive, emphasizing chiefly the need for atheists to think more clearly and especially to stop contradicting themselves. This volume is recommended especially for those who are interested in the current debates on the subject of the New Atheism.
-Gary R. Habermas,
Liberty University

The Atheist's Fatal Flaw offers a concise and important look at the logical fallacies of today's atheism and how to respond from a biblical perspective. Readers will find the information they need to better comprehend and communicate their faith to both skeptics and to believers who desire to share the reason for the hope within them.
-Dr. John Ankerberg

The Atheist's Fatal Flaw maintains a calm, reasonable objectivity in exposing an explicit inconsistency in atheism. The message of the atheists contains two crucial points. On the one hand, if there were a good God, he would make himself known far more clearly in the universe than the atheist is willing to acknowledge. On the other hand, atheists rule out of court the notion that God could have or would have actually intervened in the world, as demonstrated by the typical atheist argument against miracles. Written in a clear, flowing style, this book is a model for Christian apologetics today.
-Winfried Corduan, PhD,
Taylor University

Atheists like to exalt logic and reason. In The Atheist's Fatal Flaw, Geisler and McCoy effectively utilize logic and reason to utterly demolish key atheistic arguments, showing their profound inconsistencies and contradictions, especially as related to divine intervention and the problem of evil. Highly recommended.
-Dr. Ron Rhodes

▼▲
I'm the author/artist and I want to review The Atheist's Fatal Flaw: Exposing Conflicting Beliefs.
Back
Back