Skip to main content
The New Atheist Crusaders and Their Unholy Grail: The Misguided Quest to Destroy Your Faith - eBook
By: Becky Garrison
Stock No: WW5948EB 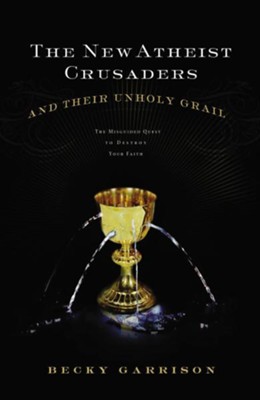 The New Atheist Crusaders and Their Unholy Grail: The Misguided Quest to Destroy Your Faith - eBook

▼▲
A challenge has been issued on matters of faith and Becky Garrison meets it head on in this witty yet poignant answer to the Anti-God gurus Richard Dawkins, Sam Harris, and Daniel Dennett.

Instead, Garrison steels her pen and takes on the ungodly program of the New Atheists, skewering each argument with her sharp satiric wit. Garrison turns aside the atheists' assault without ignoring its real criticisms, namely, the church's inadequate response to war, evolution, medical ethics, social justice, and other important issues in the post-9/11 world.

Becky Garrison is a Contributing Editor for Sojourners. Her books include The New Atheist Crusaders and Their Unholy Grail, Rising from the Ashes: Rethinking Church, and Red and Blue God, Black and Blue Church. Her additional writing credits include work for The Wittenburg Door, Geez, Killing the Buddha, and Religion Dispatches, as well as various other odd and sundry publications.

▼▲
Garrison has long wielded wit against the buffoonery of the Religious Right in her articles for the Christian humor magazine the Wittenburg Door and at the blog Gods Politics. Now she turns her satirical glance against the New Atheists, among whom she sees a similar obscurantist self-seeking at work. The result is an uneven book. It is occasionally witty, as when she compares Sam Harris to Anne Coulter, or Daniel Dennett to the pot-smoking professor in Animal House. At times she scores what could be devastating points against the New Atheists: if imposing religion on the young really is child abuse, why do these young people not show the medical symptoms of abuse victims? Garrison is also adept at pointing to places where radical Christianity is transforming society. But these successes are often lost amid informal writing, sentences like Simply put, I need to pay attention here because when my gut starts acting up, something aint right, and paragraphs that end with single words like Kewl and phrases such as  Nuff said. Finally, Garrisons turn to her own storya minister father, dead too young of alcoholismis touching at times, but it sits awkwardly beside the casual witticisms. (Jan.) Copyright 2008 Reed Business Information.

▼▲
I'm the author/artist and I want to review The New Atheist Crusaders and Their Unholy Grail: The Misguided Quest to Destroy Your Faith - eBook.
Back
Back