Skip to main content
SPRING CYBER EVENT STARTS NOW: And it's a really BIG deal! Up to 88% off through 5/24>
God and the New Atheism: A Critical Response to Dawkins, Harris, and Hitchens
By: John F. Haught
Stock No: WW233044 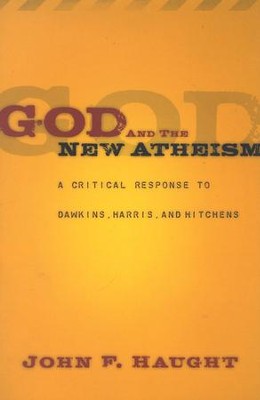 God and the New Atheism: A Critical Response to Dawkins, Harris, and Hitchens

▼▲
It can sometimes be difficult just believing what you know to be true. When the best-seller lists are packed with anti-Christian treatises by intellectual-sounding writers, the questions arise. Should I examine my faith in the light of this 'new' information? Should I ignore the authors because they are atheists? Will their conclusions make me doubt my faith if I read their books? Does it really matter?
Faith is under fire; Christianity is being attacked from many fronts; the new 'soft' atheism (not the classical 'hard' atheism of Nietzsche and Sartre) is much in the news. But instead of being overwhelmed by the world, the conscientious Christian should study the Word of God to find the answers, and it isn't really difficult to do. In this book John Haught takes on a triumvirate of modern atheists who have become media darlings of late - Richard Dawkins, Sam Harris and Christopher Hitchens - elucidating their arguments to show their failure, both in logic and in rhetoric.
Haught, basing his methodology on the theology of Tillich, Barth, Rahner and other similar theologians, applies logic to the problem of the new soft-core atheism, but with a focus on the problem, not (for the most part) the theological implications. A final chapter (using theistic evolution as it's argument) caps off the book with an attack on the atheists' understanding of God, thus showing that these books are simply attacking a fallacious version of a deity they believe to be the Christian God.

In God and the New Atheism, a world expert on science and theology gives clear, concise, and compelling answers to the charges against religion laid out in recent best-selling books by Richard Dawkins (The God Delusion), Sam Harris (The End of Faith), and Christopher Hitchens (God Is Not Great). For some, these "new atheists" appear to say extremely well what they believe to be wrong with religion. But, as John Haught shows, the treatment of religion in these books is riddled with logical inconsistencies, shallow misconceptions, and crude generalizations. Can God really be dismissed as a mere delusion? Is faith really the enemy of reason? And does religion really poison everything? God and the New Atheism offers a much-needed antidote to the extremist claims of scientific fundamentalism. This provocative and accessible little book will enable readers to see through the rhetorical fog of this recent phenomenon and come to a clearer understanding of the issues at stake in this crucial debate.

▼▲
John F. Haught is Senior Fellow in Science and Religion at the Woodstock Theological Center at Georgetown University in Washington, D. C. One of the world's leading thinkers in the field of theology and science, Haught was Chair and Professor in the Department of Theology at Georgetown from 1970 to 2005. An international lecturer and prolific author, his books include Christianity and Science, God After Darwin: A Theology of Evolution, and the prize-winning Deeper than Darwin: The Prospects for Religion in the Age of Evolution.

▼▲
I'm the author/artist and I want to review God and the New Atheism: A Critical Response to Dawkins, Harris, and Hitchens.
Back
Back