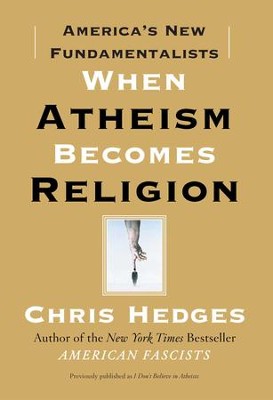 ▼▲
Freedom of speech in America is being employed today for many platforms, both pro- and anti-religious. Chris Hedges was part of the Pulitzer Prize winning team for Explanatory Reporting on global terrorism, and now he turns his attention towards extremism in atheism. But Hedges doesn't let Christians off easy either; his attacks are evenly meted out on the secular fundamentalists (or 'New Atheists', such as Christopher Hitchens and Sam Harris) and religious fundamentalists, even siding with the atheists on the issue of evolution vs. biblical creationism. Using the term 'fundamentalism' in its modern sense of 'religious extremism', Hedges examines the similarities between these two disparate strains of religious thought.

▼▲
From the New York Times bestselling author of American Fascists and the NBCC finalist for War Is a Force That Gives Us Meaning comes this timely and compelling work about new atheists: those who attack religion to advance the worst of global capitalism, intolerance and imperial projects.

Chris Hedges, who graduated from seminary at Harvard Divinity School, has long been a courageous voice in a world where there are too few. He observes that there are two radical, polarized and dangerous sides to the debate on faith and religion in America: the fundamentalists who see religious faith as their prerogative, and the new atheists who brand all religious belief as irrational and dangerous. Both sides use faith to promote a radical agenda, while the religious majority, those with a commitment to tolerance and compassion as well as to their faith, are caught in the middle.

The new atheists, led by Richard Dawkins, Christopher Hitchens and Sam Harris, do not make moral arguments about religion. Rather, they have created a new form of fundamentalism that attempts to permeate society with ideas about our own moral superiority and the omnipotence of human reason.

I Don't Believe in Atheists critiques the radical mindset that rages against religion and faith. Hedges identifies the pillars of the new atheist belief system, revealing that the stringent rules and rigid traditions in place are as strict as those of any religious practice.

Hedges claims that those who have placed blind faith in the morally neutral disciplines of reason and science create idols in their own image -- a sin for either side of the spectrum. He makes an impassioned, intelligent case against religious and secular fundamentalism, which seeks to divide the world into those worthy of moral and intellectual consideration and those who should be condemned, silenced and eradicated. Hedges shatters the new atheists' assault against religion in America, and in doing so, makes way for new, moderate voices to join the debate. This is a book that must be read to understand the state of the battle about faith.

▼▲
Chris Hedges was a foreign correspondent for nearly two decades for The New
York Times, The Dallas Morning News, The Christian Science
Monitor and National Public Radio. He was a member of the team that won the
2002 Pulitzer Prize for Explanatory Reporting for The New York Times
coverage of global terrorism, and he received the 2002 Amnesty International
Global Award for Human Rights Journalism. Hedges is the author of the bestseller
American Fascists and National Book Critics Circle finalist for War Is
a Force That Gives Us Meaning. He is a Senior Fellow at The Nation Institute
and a Lannan Literary Fellow and has taught at Columbia University, New York
University and Princeton University.

▼▲
I'm the author/artist and I want to review When Atheism Becomes Religion: America's New Fundamentalists - eBook.
Back
Back