Skip to main content
At Love's Bidding
By: Regina Jennings
Stock No: WW211416 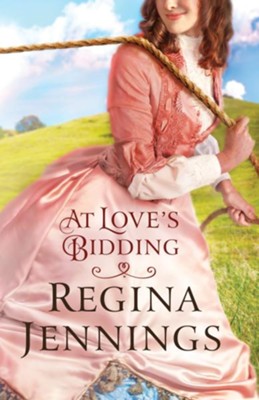 When Miranda assists at her grandfather's Boston auction house, she accidentally sells a powerful family's prized portrait. Grandpa tracks the bidder to the Ozarks and quickly buys the local dealer's business. But when they arrive and find cattle, not paintings, they discover he's impulsively purchased livestock! Can Miranda salvage the situation with the handsome boss, Wyatt?

▼▲
Regina Jennings Is a Rising Voice
in Humorous Historical Romance

After helping her grandfather at their Boston auction house, Miranda Wimplegate discovers she's accidentally sold a powerful family's prized portrait to an anonymous bidder. Desperate to appease the furious family, her grandfather tracks it to the Missouri Ozarks and makes an outlandish offer to buy the local auction house if they promise not to sell anything until he arrives.

Upon their arrival, however, they discover their new business doesn't deal in fine antiques, but in livestock. And its manager, ruggedly handsome Wyatt Ballentine, is frustrated to discover his fussy new bosses don't know a thing about the business he's single-handedly kept afloat. Faced with more cattle than they can count--but no mysterious painting--Miranda and Wyatt form an unlikely but charged partnership to try and salvage a bad situation getting worse.

▼▲
Regina Jennings is a graduate of Oklahoma Baptist University with a degree in English and a history minor. She is the author of A Most Inconvenient Marriage, Sixty Acres and a Bride, and Caught in the Middle, and contributed a novella to A Match Made in Texas. Regina has worked at the Mustang News and First Baptist Church of Mustang, along with time at the Oklahoma National Stockyards and various livestock shows. She now lives outside Oklahoma City, Oklahoma, with her husband and four children and can be found online at www.reginajennings.com.

▼▲
I'm the author/artist and I want to review At Love's Bidding.
Back