We are OPEN and SHIPPING - click here for shipping estimates
At Every Turn - eBook
By: Anne Mateer 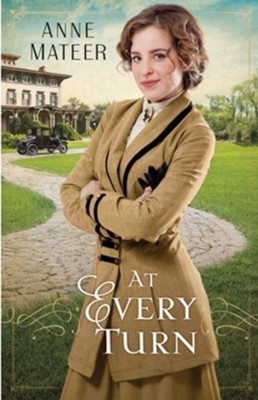 At Every Turn - eBook

▼▲
Alyce Benson needs money fast! After pledging $3,000 to a mission, she thought her wealthy father would give her the cash---but he refused. So she concocts a plan with Webster, a mechanic, to race a new 1916 car manufactured by her dad's company. Will she win the money? Can she trust Webster in spite of his past?

Caught up in a whirlwind of religious enthusiasm, Alyce Benson impetuously pledges three thousand dollars to mission work in Africa. Now she just has to find a way to get the money.

Alyce harbors a secret passion for speed and automobiles, and she's spent many an afternoon driving around the rustic track in the field behind her home. When she discovers that her father's company has sponsored a racing car that will compete in several upcoming events--races in which the driver will be paid and could win as much as five thousand dollars in prize money--she conspires with her father's mechanic, Webster, to train and compete.

But when her friends cast aspersions on Webster's past, she realizes she may have trusted the wrong person with her secret. Will Alyce come up with the money in time, or will she have to choose between her hasty promise and the man who holds a piece of her heart?

"This heartwarming, story will find fans among readers of Lori Wick."--Library Journal

▼▲
Anne Mateer is a novelist with a passion for history and historical fiction. She and her husband live near Dallas, Texas, and are the parents of three young adults. Learn more at www.annemateer.com.