Skip to main content
SPRING CYBER EVENT STARTS NOW: And it's a really BIG deal! Up to 88% off through 5/24>
Torn Asunder Workbook: Recovering From an Extramarital Affair - eBook
By: Dave Carder
Stock No: WW10740EB 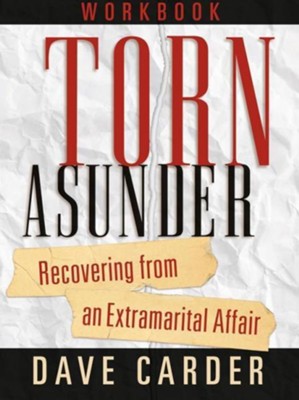 ▼▲
Infidelity is at crisis levels even within the church. No marriage is immune despite apparent moral convictions. Dave Carder wrote Torn Asunder to offer couples hope, healing, and encouragement in the face of adultery. He divides his book into first helping readers understand extramarital affairs and then offering healing for marriages dealing with this betrayal.

The workbook allows couples to work through and apply the material presented in Torn Asunder. It is organized into daily twenty-minute exercises initiated by each spouse on alternating days. Because this tragic situation is not easily resolved, it is imperative to get couples on the road to healing and oneness.

Based on the principles in the bestselling Torn Asunder—a book that has helped thousands of people survive infidelity—this revised and expanded workbook offers five crucial services for hurting couples:

The Torn Asunder workbook is built around daily twenty-minute homework exercises, initiated by each spouse on alternating days for ten to fifteen weeks. Working with your spouse might be the last thing you want to do right now, but it’s essential to your long-term recovery, whether or not your marriage survives.

Healing won’t be easy. But the Torn Asunder workbook provides hope, encouragement, and practical advice for the journey. Take the first step today.

▼▲
DAVE CARDER serves as Pastor of Counseling Ministries at First Evangelical Free Church of Fullerton, CA. His specialty is Adultery Recovery and Prevention for which he has appeared on The Oprah Winfrey Network, Discovery Health, and The Learning Channel, has done training for the US Army and Navy, plus multiple tapings for The Tony Robbins Passion Project, Marriage Uncensored, 100 Huntley Street, Salvation Army Leadership Training, and the American Association of Christian Counselors. His interviews and articles have appeared in Ladies Home Journal, USA Today, The Counseling Connection, and various other magazines and journals. He is the author or co-author of Torn Asunder: Recovering from an Extramarital Affair, Close Calls: What Adulterers Want You to Know About Protecting Your Marriage, and Unlocking Your Family Patterns: Finding Freedom from a Hurtful Past. He holds the Michigan Limited License for Psychology and the California Marital and Family Therapy license, and has graduate degrees in Biblical Literature and Counseling Psychology. Dave and his wife, Ronnie, have been married 49 years, have four adult children, and eight grandchildren.

Born in Scotland, Stuart McAllister saw his life changed by Christ at the early age of twenty. Filled with a hunger to learn more and deepen his understanding of the faith led him to join Operation Mobilization in 1978. He worked with the organization for twenty years in Vienna, Austria, and his service took him to Yugoslavia, where he was imprisoned for forty days for distributing Christian literature. Upon his release, he continued to work in communist countries, resulting in more imprisonments.

With a rich history of service, Stuart has acted as General Secretary of the European Evangelical Alliance (1992-1998) and been involved with the European Lausanne Committee. He developed a mobilization movement called Love Europe, which sent several thousand team members across Europe with the message of the Christian faith. Stuart also founded the European Roundtable, bringing together a diverse group of ministries and interests that collaborated to foster “Hope for Europe.”

Stuart joined Ravi Zacharias International Ministries in 1998 as the International Director and today serves as Global Support Specialist. With a heavy travel schedule that takes him all over the globe, Stuart speaks in churches, universities, and other forums with the same passion he first knew as a follower of Christ. Stuart has been a lecturer at Alliance Theological Seminary in Nyack, New York, where he was honored with a doctor of divinity. Additionally, he has been a featured speaker several times at the European Leadership Forum.

Cameron McAllister is an itinerant speaker at RZIM. He is the host of the Vital Signs podcast, a weekly podcast exploring signs of life in today’s culture, and the co-host (with Nathan Rittenhouse) of Thinking Out Loud, a podcast that considers current events and Christian hope. Cameron and his father, Stuart McAllister, co-wrote a book, Faith that Lasts: A Father and Son on Cultivating Lifelong Belief, which will be published in January 2021. Cameron enjoys exploring the intersection of Christianity and popular culture, and his film and television reviews have appeared in Christianity Today and Think Christian. He holds a degree in philosophy and religion from Toccoa Falls College and recently earned a master in cultural apologetics from Houston Baptist University.

Cameron was born on the mission field in Vienna, Austria. He moved to the US with his family in 1998 when his father began working with RZIM. Cameron, his wife, Heather, and their two children currently reside in Georgia.

▼▲
I'm the author/artist and I want to review Torn Asunder Workbook: Recovering From an Extramarital Affair - eBook.
Back
Back