Skip to main content
SPRING CYBER EVENT STARTS NOW: And it's a really BIG deal! Up to 88% off through 5/24>
Astronomy 101: From the Sun and Moon to Wormholes and Warp Drive
By: Carolyn Collins Petersen
Stock No: WW563591 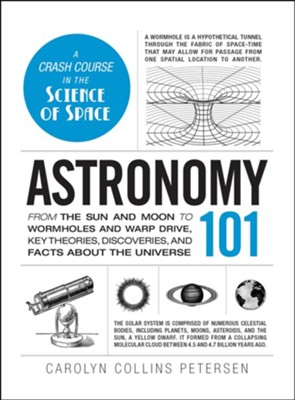 Astronomy 101: From the Sun and Moon to Wormholes and Warp Drive

▼▲
Explore the curiosities of our galaxy with this comprehensive, digestible guide to astronomy!

Too often, textbooks obscure the beauty and wonder of outer space with tedious discourse that even Galileo would oppose. Astronomy 101 cuts out the boring details and lengthy explanations, and instead, gives you a lesson in astronomy that keeps you engaged as you discover what's hidden beyond our starry sky.

From the Big Bang and nebulae to the Milky Way and Sir Isaac Newton, this celestial primer is packed with hundreds of entertaining astronomy facts, charts, and photographs you won't be able to get anywhere else.

So whether you’re looking to unravel the mystery behind black holes, or just want to learn more about your favorite planets, Astronomy 101 has all the answers—even the ones you didn’t know you were looking for.

▼▲
Carolyn Collins Petersen is a science writer and producer of astronomy and space-science media for planetarium facilities, observatories, science centers, and webpages. She is CEO of Loch Ness Productions, a unique multimedia production company. Recent productions include Losing the Dark a collaboration with the International Dark-Sky Association. She has authored several books on astronomy and planetary science, and more than 75 documentary scripts. Carolyn is also a voice-over talent, lending her voice for many science narrations, including the series Space Weather FX produced by Loch Ness Productions for MIT’s Haystack Observatory. You can also see and hear her work at Astrocast.TV and the Astronomical Society of the Pacific, in their Astronomy Behind the Headlines series. One of Carolyn’s favorite pastimes is to read science fiction. Her favorite authors include Lois McMaster Bujold, Arthur C. Clarke, and Robert A. Heinlein. She lives in Colorado with her husband Mark, and three cats who own the house.

▼▲
I'm the author/artist and I want to review Astronomy 101: From the Sun and Moon to Wormholes and Warp Drive.
Back