Skip to main content
BIG SUMMER BLOWOUT: Over 2,000 deals ~ up to 85% off, through 8/16. Shop now >
Poetic Astronomy in the Ancient Near East: Celestial Science in Mesopotamian, Ugaritic, and Israelite Narrative
By: Jeffrey L. Cooley
Stock No: WW062624 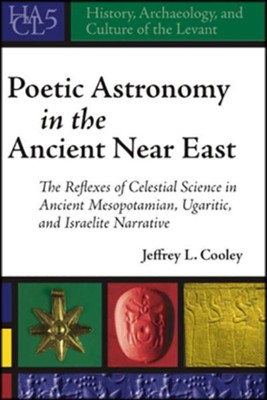 Poetic Astronomy in the Ancient Near East: Celestial Science in Mesopotamian, Ugaritic, and Israelite Narrative

Modern science historians have typically treated the sciences of the ancient Near East as separate from historical and cultural considerations. At the same time, biblical scholars, dominated by theological concerns, have historically understood the Israelite god as separate from the natural world. Cooley’s study, bringing to bear contemporary models of science history on the one hand and biblical studies, on the other hand, seeks to bridge a gap created by 20th-century scholarship in our understanding of ancient Near Eastern cultures by investigating the ways in which ancient authors incorporated their cultures’ celestial speculation in narrative.

In the literature of ancient Iraq, celestial divination is displayed quite prominently in important works such as Enuma Eliš and Erra and Išum. In ancient Ugarit as well, the sky was observed for devotional reasons, and astral deities play important roles in stories such as the Baal Cycle and Shahar and Shalim. Even though the veneration of astral deities was rejected by biblical authors, in the literature of ancient Israel the Sun, Moon, and stars are often depicted as active, conscious agents. In texts such as Genesis 1, Joshua 10, Judges 5, and Job 38, these celestial characters, these “sons of God,” are living, dynamic members of Yahweh’s royal entourage, willfully performing courtly, martial, and calendrical roles for their sovereign.

The synthesis offered by this book, the first of its kind since the demise of the pan-Babylonianist school more than a century ago, is about ancient science in ancient Near Eastern literature.

▼▲
I'm the author/artist and I want to review Poetic Astronomy in the Ancient Near East: Celestial Science in Mesopotamian, Ugaritic, and Israelite Narrative.
Back